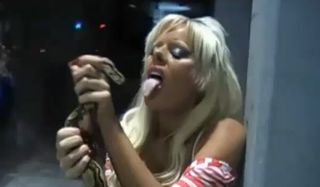 After Israeli model Orit Fox was bitten on her surgically-enhanced breast by a snake, rumors began to spread that the serpent died because it was poisoned by silicone ingested from her breast implant. Several news sources reported the gossip as fact, but wildlife experts say it's impossible for a snake to die from biting a human breast even one that's full of silicone.

During an ill-fated stunt for a Tel Aviv radio show on March 3, Fox posed with a massive boa constrictor and was bitten on her left breast after she licked the snake's face. A video of the snake latching onto Fox went viral, and after commenters on a celebrity gossip blog joked that the snake died from silicone poisoning, news sources, including the Daily News, the London Sun and the New York Post, began reporting that it actually had.

However, a reptile expert said that the silicone poisoning scenario is impossible.

"Snakes can eat some really sick animals and not contract mammalian diseases. So I have not heard of a snake getting sick or dying after biting a human," Mark Kilby, owner of the Luray Zoo and Luray Reptile Center in West Luray, Va., told Life's Little Mysteries.

But mostly, snakes aren't vampires. They don't suck when they bite . "I can't see the boa constrictor that bit that model getting any of the contents of the material from the implant, being silicone or saline, in its mouth to cause any ill effect to the boa," Kilby said.

After the bite, Fox was rushed to the Hillel Yaffe Medical Center in Hadera, Israel, and given a tetanus shot if the snake had actually bitten through deep enough to puncture the implant, Fox would have needed much more serious medical care than just a shot. Fox reportedly stayed for observation and was soon released, so far suffering no long-term damage from the incident.

That the boa constrictor punctured an implant is also unlikely because it doesn't have two large, long fangs like a viper, but rows of small teeth that aren't venomous. Snakes that do have fangs, which are hollow and inject vermin into their prey, are defanged before they are used in professional stunts, photo shoots and performances.

A serpent's natural instinct is to strike when it feels threatened, so even a snake with missing fangs will still attempt to bite an enemy. Kilby notes that going face-to-face with a snake is never a good idea, even if it's been defanged.

"As a side observation, the model provoked the bite by putting her face in the boa constrictor's face, causing the snake to get defensive," he said. "When it got close to the next bulging object, the boa retaliated by biting."

Watch the video below: