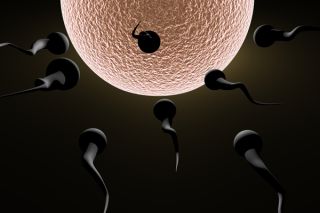 Let's face it the concept of space-sex is pretty hot. Plus, when we humans eventually strike out to create colonies on other planets , we're going to need to procreate maybe even on the way there. But just how complicated will it be to put a bun in the oven while you're on another planet? Pretty difficult, actually. Space, it turns out, essentially acts as one big birth control system. One space-sex study published last fall predicts that cosmic radiation would bombard the body at such a high rate during a long space trip or an extended stay on Mars that sperm count would decrease and fetuses wouldn't be able to properly develop in a space environment. Even though existing and proposed space conveyances have improved radiation protection, they don't contain nearly enough shielding to allow zygotes to develop. And even if a baby was able to make it out of the womb, it would have a high probability of birth defects from the radiation damage. And that's not the end of the potential problems. Animal studies have shown that exposure to radiation can kill egg cells in a fetus as far along as the second or third trimester, so any babies born would be sterile making it hard to populate a new planet. So what happens when astronauts return to Earth? At least one researcher who's studied the scenario says that despite the reports, he hasn't seen much evidence of compromised fertility. One doctor, Richard Jennings, an aerospace medicine expert at the University of Texas Medical Branch, said that he's seen astronauts get their spouses pregnant soon after returning from a space flight. Longer space missions may warrant more study of the reproductive system, Jennings told a newspaper last month. But then there's also the substantial challenge of actually doing the deed in space. Current space suits don't have a lot of options for getting hot and heavy, but you would need to wear some sort of suit: In zero-gravity, sweat and other bodily fluids float away from writhing bodies and can possibly damage electronics. (This is exacerbated by the fact that people also get sweatier in space.) Some experts have suggested that "intimacy chambers" filled with droplets of cool water or scented oil could be added to theoretical tourist shuttles to help improve the mood. But even with such wonderful, scented surroundings, body mechanics might prevent any magical moments. Microgravity decreases blood pressure, which could prevent the guy's penis from becoming fully erect. NASA's a little prudish on the subject, by the way operating with a don't ask don't tell policy on the issue so don't look to the agency for much guidance. Drugs don't work the same way in space, either so don't count on those birth control pills to do their usual job. But it sounds like they may not be needed anyway in the future, we may all be sexually frustrated on our space vacations. The future pioneers who try to populate other worlds may need to do some serious rejiggering to create ships that will let the next generation of explorers live long, prosper and get it on.