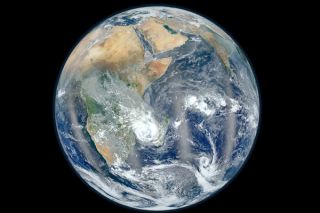 Gravity has less pull at the equator.
(Image: © NASA/NOAA.)

Amazingly, you would experience less gravity at Earth’s equator. An object's gravitational pull on another object depends upon both objects' masses and their mutual distance.

Earth has a bulge at the equator created by the planet’s rotation and a moving body’s tendency to continue in a straight line. (Sometimes this is misleadingly called "centrifugal force", but it's really just Newton’s laws of motion.) The planet's spare tire creates an uneven gravitational field.