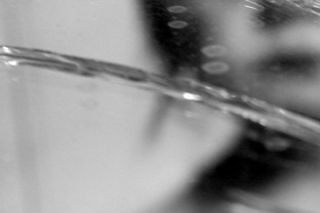 Though glass behaves like a liquid sometimes, that does not mean it can sag over time.
(Image: © sxc.hu)

If you look at glass in old windows, it can look distorted, apparently because the lower part of the pane is thicker than the upper part.

Some people think that's because the glass, which behaves like a liquid at times, has sagged over time due to the effect of gravity.

But scientists see through this myth. Glass, usually made of silicon dioxide, doesn't change its shape over the short timescales relevant to humans, says chemist Paddy Royall of the University of Bristol, England. (If it does change shape, that process takes billions of years.)

"The deformations are induced when the SiO2 is cooled from its molten — liquid — state to the glass," Royall told LiveScience.

Nowadays, most glass is made with the float method, which involves making sheets by floating molten glass on a bed of molten tin to keep the sheets flat and of uniform thickness.

Before that, the glass in windows was cut and flattened from blown cylinders or disks, therefore it was not as flat as modern glass.

"In fact, in old churches, for example, some windows are fatter at the bottom, while others are fatter at the top, depending in the way the builders happened to put them in," said Royall, who had this pointed out to him by his colleague Stephen Williams at the Australian National University in Canberra.