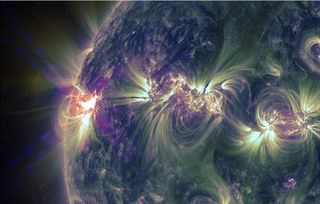 A huge X1.2-class solar flare erupted from the sun late Tuesday (May 14, 2013), the fourth major flare in two days from a busy sunspot on the surface of the sun. NASA's Solar Dynamic Observatory captured this view of the event.
(Image: © NASA/SDO)

An overachieving sunspot on the surface of the sun unleashed its fourth major solar flare in two days late Tuesday (May 14), a solar storm that may deal Earth a glancing blow, space weather experts say.

The active sunspot AR1748 roared to life Tuesday night releasing an X-class solar flare — the strongest type the sun can experience — that peaked at 9:48 p.m. EDT (0148 May 15 GMT), according to NOAA's Space Weather Prediction Center in Boulder, Colo. The flare came after a relative lull in activity from sunspot AR1748, which fired off three monster X-class solar flares within a 24-hour period between Sunday and Monday.

In a morning update, NOAA space weather officials said they are studying this latest solar flare from AR1748 to see if it coincided with an eruption of super-hot solar plasma known as a coronal mass ejection, or CME. Such explosions can unleash huge waves of charged solar material streaking out into space at millions of miles per hour.  [Sun Unleashes Biggest Flares of 2013 (Photos)]

"Too early to know if a CME occurred. If one did, it may just glance the Earth's magnetic field, given its off-center location still," SWPC officials said. "Forecasters are pondering that one."

Sunspot AR1748 is about twice the size of Earth and is currently located on the sun's extreme left side, so it is not directly facing our planet.

The solar storm Tuesday night registered as an X1.2 solar flare, making it the weakest in the four-flare series from sunspot AR1748. The stormy activity began late Sunday (May 12) when the sun fired off an X1.7 flare. Two more flares followed on Monday, an X2.8 flare at midday and an even stronger X3.2 that night.

According to solar astrophysicist C. Alex Young at NASA's Goddard Space Flight Center, the sunspot will likely be facing Earth by this weekend.

"In a couple of days, it will be far enough onto the disk that any CMEs that we got would probably have some impact on Earth," Young told SPACE.com Tuesday.

When aimed directly at Earth, X-class solar flares can pose a risk to astronauts and satellites in orbit, as well as interfere with radio, GPS and other communications signals. X-class flares and more moderate, but still intense, M-class sun storms can also supercharge Earth's auroras to create spectacular northern lights displays.

The sun is currently in an active period of its 11-year solar weather cycle and is expected to reach its peak activity later this year. The current sun weather cycle, called Solar Cycle 24, began in 2008.

Scientists have been tracking the sun's solar flares and other space weather events since they were first discovered in 1843. Today, a fleet of international spacecraft keep constant watch on the sun's activity.

This story was provided by SPACE.com, a sister site to LiveScience.  Email Tariq Malik at tmalik@space.com or follow him @tariqjmalik and Google+. Follow us @Spacedotcom, Facebook and Google+. Original article on SPACE.com.