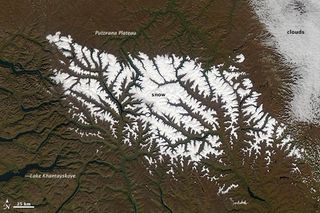 Snow covers the highlands of the Putorana Plateau in central Siberia in this image taken by NASA's Terra satellite on Sept. 4, 2012.
(Image: © NASA)

The seasons are once again shifting, with the Northern Hemisphere headed into autumn and the Southern Hemisphere emerging into spring. In satellite images of spots in both hemispheres, snow has left its mark on the changing landscape.

On Sept. 4, the Moderate Resolution Imaging Spectroradiometer (MODIS) on NASA's Terra satellite snapped a picture of snow covering the highlands of the Putorana Plateau in central Siberia, a NASA release said.

It is not unusual for the plateau to see snow in early September, as it lies within the Arctic Circle and sits at a high elevation, the release noted.

Thousands of miles and a hemisphere away in Tasmania, the same instrument caught a glimpse of snow covering the tops of mountains in Tasmania's Central Highlands on Aug. 31.

Though the two pictures of snow may look similar to the untrained eye, experts can see subtle differences: "Because the snow in Siberia is likely fresh and probably fell at night, the snowline is nearly the same elevation throughout the scene," NASA physical scientist James Foster said in the NASA statement. "There's no melting on southern and western slopes. The snowline is definitely temperature-controlled, and there is no snow below a certain elevation. This is not the case in the Tasmania image, where the snow pack has had an opportunity to melt."