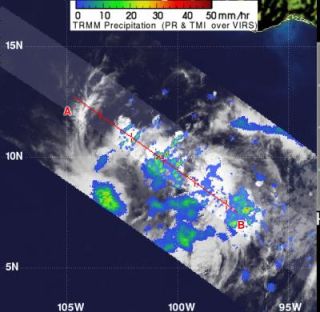 When NASA's TRMM satellite passed over TD02E on May 21, 2012, at 08:50 UTC (4:50 a.m. EDT), data revealed a hot tower over 15 kilometers (9.3 miles) high. TRMM also measured rainfall within the tropical depression, and found that isolated areas of heavy rain (falling at a rate of 2 inches/50 mm per hour (appearing in red)) were seen in the northwestern quadrant of the storm. Light to moderate rainfall was falling at a rate between .78 inches and 1.57 inches per hour (20 to 40 mm).
(Image: © NASA/TRMM, Hal Pierce)

Before Tropical Depression 2E intensified into Tropical Storm Bud early this morning (May 22), a NASA satellite spotted the signature "hot tower" rain clouds that signal a storm is heating up.

A "hot tower" is a rain cloud that reaches at least to the top of the troposphere, the lowest layer of the atmosphere, which in the tropics extends to an altitude of about 9 miles (14.5 kilometers).

The clouds are called "hot" because of the high amount of latent heat they possess, which is what propels them to such heights. As this warm air rises, the water vapor in it turns to liquid and releases the latent heat — the engine of convection, which drives the storm.

NASA scientists have found through satellite observations of storms that a storm with a hot tower in its eyewall — the ring of clouds around a cyclone's central eye—is twice as likely as one without a hot tower to intensify in the next six hours.

NASA's Tropical Rainfall Measuring Mission (TRMM) satellite passed over Tropical Depression 2E at 08:50 UTC (4:50 a.m. EDT) on May 21 and spied a hot tower within the storm that was more than 9.3 miles (15 km) high. This finding was one piece of evidence that forecasters with the National Hurricane Center used to predict that the storm would intensify into Tropical Storm Bud by the following day, which is exactly what happened.

TRMM also measured rainfall within the tropical depression and found that isolated areas of heavy rain in the northwestern quadrant of the storm were falling at a rate of 2 inches (50 millimeters) per hour. Light-to-moderate rainfall was falling throughout the rest of the storm.

The latest NHC update had Bud at 485 miles (780 kilometers) south-southwest of Zihuatanejo, Mexico, with maximum winds of 40 mph (65 kph). The storm was expected to strengthen in the next 48 hours and could become a hurricane by tomorrow (May 23), the forecast said.