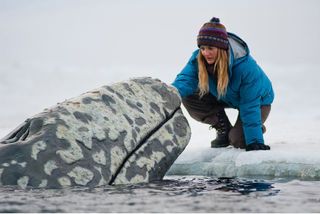 For two weeks in October 1988, much of the world became transfixed by the fate of three gray whales that had become trapped in encroaching sea ice off the town of Barrow, on the north coast of Alaska. President Ronald Reagan expressed his support for any effort to free the whales, an effort that involved Inupiat whalers, oil company workers, the National Guard, the Coast Guard, the National Oceanic and Atmospheric Administration (NOAA) and, ultimately, a pair of Soviet icebreakers. At the center of it all was Cindy Lowry, Alaska representative for Greenpeace, who proved the catalyst for the whole enterprise.

A fictionalized version of those events has been made into a movie, "Big Miracle", starring Drew Barrymore as a Greenpeace volunteer closely modeled on Cindy. Lowry's former Greenpeace colleague, Kieran Mulvaney, spoke to her for Discovery News about the events of 1988 and their representation on the silver screen.

ANALYSIS: Selling Whales to Save Them?

Discovery News: I have an image of two separate phone calls twenty years apart, the second being, ‘Hey, remember what happened 20 years ago? We want to make it into a movie.’ But also, that first contact, and the whirlwind that followed when you were first told about these whales.

Cindy Lowry: This press article, kind of a tiny press article, came out in the news, and some people called to ask if we had an icebreaker we could use to free the whales, and I said, ‘Well, that’s not really in our flotilla at the moment, but I’ll make some calls.’ And in the meantime, I had some calls from Barrow, from the biologist I’d worked with over the years up there, giving me an update on how the whales were doing, and at the time, it didn’t seem like they had much time left.

I called the Governor’s office and asked where the US Coast Guard ice cutter [vessel] might be, and they basically told me they weren’t about to ask them to turn around to help three whales. So I said, ‘Well, that’s a bad decision [laughs] but I’ll move forward’ and over the next day and a half, it was one of those magical periods of me being able to get in touch with the right people. I called the National Guard and General [John] Schaeffer happened to pick up the phone. And then a reporter friend told me the U.S. had an agreement with the Soviets that if one of our ships was in trouble that they would help us, and vice-versa. So I thought, ‘Well, why don’t we see where their icebreaker is?’ My home office became Grand Central for a while; it was one of those things that was just meant to happen, on so many levels.

You talk about things happening over a day and a half. That’s an incredibly short space of time for things to happen. By the end of Day One, you had an anonymous phone call offering you an oil company barge, the Under-Secretary for Oceans calling you from Washington, DC pledging the Administration’s help – it’s remarkable how rapidly it took off.

It is. I just think that at the time I wasn’t thinking about that. I was just so focused on the mission. But so many things happened along the way at the right moment.

How long did it take before you went to Barrow?

Two days. I was making the calls on the Friday, and on Sunday I was in Barrow. And it was such a pitiful sight: There were these two holes [in the ice] and even the larger of the two was only just large enough for two [of the three] whales to breathe. And we could tell right away that the smaller one wasn’t breathing that well. And we got off the helicopter and walked over there and my immediate thought was, ‘God, this is when you wish you were Superman and could just go in and scoop them out of there.’

Once I saw them, that’s when I thought, ‘OK, all bets are off. We’re going to get them out of there.’ And I think that’s the way a lot of people felt – whether it was the Inupiat, the oil company folks, or NOAA, or the National Guard: I just think no one could see those whales and not set aside agendas and not want to help. It was amazing; those whales were the luckiest whales in the whole world.

Even after the Russian icebreakers arrived and carved a channel, it seemed as if the whales might not be able to make it. That must have been a moment of despair.

Really, one of the most amazing experiences for me was when we knew the Soviets were coming, and they were going to make their first pass, and there was just me and one other person out there on the ice, I think it was 1 or 2 in the morning, and the icebreaker kept getting closer. I think the whales could start sensing open water, and they started swimming really fast from hole to hole, and then, where we had a light set up for the Soviet ice cutter to see where the last hole was, they started rushing that last hole, and water would come rushing out of it, like a wave. And I thought, ‘Well, this is it, I probably won’t see them again.’

And I went over and knelt down by that hole, and this one whale came up and blew on me – and because it was 30 below, I had all this whale breath that just froze on the front of my parka. And then he just rested his head on the ice, and we had this most amazing eye contact, and I just said, ‘You know what? You guys are going home.’

Those whales are so dear to my heart still, and they went through so much, trying to get free.

When did you first find out that this was going to become a movie?

One of the producers called me, about a year and a half ago, and left a message saying, ‘I hope I have the right Cindy Lowry, but we’re making this film, and we’d love to talk to you, so please give us a call.’ So I called, and he told me that Drew would be playing me and I thought, ‘This is perfect, I can’t think of a better person.’ She’s very down-to-earth, she’s very passionate about these issues, she has her own issues she cares deeply about, and when we met we immediately had a great connection. We were like kindred spirits. We spent a lot of time together, and we became really great friends. In the same way that the experience itself was magical, doing the movie and being involved has been similar. From the director to the producer and Drew, they’ve been very inclusive and very respectful of the work I’ve done. It’s been a really great experience.

Was your involvement primarily one of fact-checking, or of Drew wanting to inhabit the spirit of Cindy Lowry, or all the above?

Different things. She’s definitely a professional and wants to get things right, and we spent a lot of time doing that, but she also wanted to understand what makes me tick. She and I really did spend a lot of time together. I went out to California and spent a lot of time there, and we went to Alaska, and I showed her around, where I used to live, some of my favorite places. I got to spend a couple of days on set, and it was certainly fun, at times with the camera guys and others coming up to me and going, ‘Oh, so you’re the reason we’re here!”

I’ll admit it. At the time, I was 20 years old, learning to be a campaigner, and I didn’t get it. I was like, ‘It’s just a couple of whales.’ It was about saving these whales, but it was more about that, wasn’t it?

I’m an eternal optimist, amazingly enough, all these years later, but I think it’s part of the human spirit that has this connection with wildlife, with whales, and when they’re in trouble, we want to save them, we want to do what we can to help. I was staying at the Top of the World Hotel – a tiny place, with a switchboard operator, and I’d come off the ice at 2 o’clock and I’d ask if she could wake me at 6, and she’d just end up putting through media calls as my wake-up call. [Laughs]. One of the calls that came through in that way, that woke me up, was from a schoolteacher from somewhere in the south, to say she wanted me to know how much the kids in her class were sending their support and how much they wanted us to save the whales. I feel that’s an indication of the connection that people had with them.

And it was such an amazing time: it was still the Cold War, and it wasn’t as if we were talking with the Soviets. People have asked me, ‘Why did you ever think that would work, asking the Soviets to be involved?’ And I just never thought that it wouldn’t.

Photographs by Darren Michaels/Universal Pictures. Many thanks to Stacey Zarro at NBCUniversal for her invaluable help.