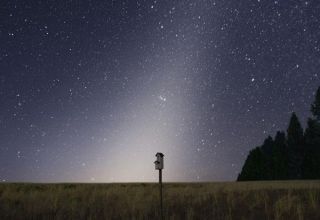 Zodiacal Light rises above the Modoc Plateau (covering parts of northeast California, Oregon and Nevada), one of the darkest places in the United States.
(Image: © Copyright Tony & Daphne Hallas)

After more than 40 years of skygazing, I sometimes catch myself thinking about certain observing sessions that stand out in my memory. Here's one of them:

Ten years ago I had the good fortune to spend several clear, moonless nights in the southern Arizona desert. On the first night, I arose around 3 a.m. and upon stepping outside immediately found myself under a magnificent star-spangled sky. With a few hours to go before sunrise, I spent a long time admiring the beautiful array of winter stars, led by Orion, the Hunter high toward the south. Looking toward the east, I could see the stars of Leo, the Lion slowly climbing up the sky.

It was also about this time that I noticed something that I had apparently overlooked earlier on in the evening. Far below Leo and rather near to the eastern horizon was some sort of very faint, whitish, diffuse glow. After about half an hour, when I again looked in the same direction, I could still see the glow, although it was now somewhat brighter and appeared to be reaching a bit higher into the sky. After another half-hour, the glow seemed brighter still and was now well up into the eastern sky, actually reaching almost up to the stars of Leo itself, now more than halfway from the horizon to the point in the sky directly overhead (called the zenith).

It almost appeared as if some local town or a distant city had suddenly materialized from beyond the nearby hills and was producing some sort of light haze projecting upwards against the sky. It briefly crossed my mind that perhaps morning twilight had begun, but a quick perusal of my watch told me that, no, dawn was still at least an hour away. [Related: Earth's Lights at Night ]

Suddenly, I realized what I was looking at. "Of course!" I said to myself. "I'm seeing the zodiacal light."

For someone who has spent the majority of his life in brightly-lit environments, this sighting of the zodiacal light was a real treat for me. In fact, I had seen this ghostly glow only once before; that previous occasion coming when I lead a tour group to the supremely dark skies of the Andes Mountains in Chile to view Halley's Comet.

And I'm far from being the first to initially mistake the zodiacal light for the onset of morning twilight. Countless others before me have been fooled as well. In fact, the Persian astronomer, mathematician and poet Omar Khayyam (1048-1131) made reference to it as a "false dawn" in his one long poem, "The Rubaiyat."

That faint ghostly glow was once thought to be solely an atmospheric phenomenon, perhaps reflected sunlight shining on the very high atmosphere of Earth . We now know, however, that while it is indeed reflected sunlight, it is being reflected not off our atmosphere, but rather off of a non-uniform distribution of interplanetary material debris left over from the formation of the planets.

These countless millions of particles ranging in size from meter-sized mini-asteroids to micron-sized dust grains seem densest around the immediate vicinity of the Sun, but they extend outward, beyond the orbit of Mars and are spread out along the plane of the ecliptic (the path the Sun follows throughout the year). Hence the reason for the name "zodiacal" light: the light is usually seen projected against the zodiacal constellations, which fall along the ecliptic.

American astronomer, Henry Norris Russell (1877-1957) once pointed out that the light we see could be accounted for if the space inside our orbit contains particles a twenty-fifth of an inch in diameter and 5 miles (8 kilometers) apart.

Best times to see it

Those who live in the tropics or at the equator are luckiest of all, since it has been said that the zodiacal light is very conspicuous from these regions. This is probably because from these locations the ecliptic is always favorably oriented allowing views of the zodiacal light both in the western evening sky and eastern morning sky all year long.

For northerners at this particular time of the year, it is just before morning twilight begins (about 90 minutes before sunrise), that the zodiacal light should appear at its brightest and most conspicuous. [Related: Telescope Review for Beginners]

You'll have an excellent opportunity to view the zodiacal light when the moon is completely out of view in the predawn sky. From now through Oct. 9 and again from Oct. 25 through Nov. 8 this important viewing criterion is met. These will be the mornings to look for the zodiacal light.

To the discerning eye, its diffuse shape resembles almost a tilted cone, wedge or slanted pyramid. At the base of the cone, the light may extend some 20 to 30 degrees along the horizon (your clenched fist held at arm's length measures roughly 10 degrees). At its best, the display can approach or even equal the Milky Way in brightness, yet it is so faint that even a small amount of atmospheric haze can obscure it.

On exceptionally clear nights, the tapering cone might be seen to stretch more than halfway to the zenith. In fact, should you have access to such conditions absolutely no artificial lighting, smoke or haze you should also try to see the zodiacal band, which runs along the entire ecliptic and usually averages about 5 to 10 degrees in apparent width.

Also difficult to see, though actually perhaps slightly brighter than the zodiacal band, is the "counterglow" or gegenschein. This is a very faint oval patch of light about 10 to 20 degrees long and 6 to 8 degrees wide and situated exactly on the ecliptic at that point diametrically opposite to the sun in the sky.

It too is interplanetary material that lies out in space but beyond the orbit of Earth. It may appear slightly brighter than the zodiacal band because every single mini-asteroid or meteoroid is on the exact opposite side of the sun, so individually they're illuminated in much the same manner as the moon at full phase. As such, a maximum amount of light is returned to the Earth, thus producing a concentrated glow at that particular portion of the band.

To see the gegenschein with certainty is no small achievement. Not only does it require absolutely black skies, but unusual perception and visual acuity. Moreover, if it occurs anywhere in or near the Milky Way, it will be hopelessly lost in our galaxy's light.

Fortunately during this upcoming week it is located in the dim constellation of Pisces, the fish, which is well to the south of the Milky Way. Look for the four stars that form the famous Great Square of Pegasus and draw an imaginary diagonal line from the star at the upper right corner of the square, down to the star in the lower left corner and extend the line a similar distance out to a rather star-poor region of the sky. The gegenschein should be centered right about here.

Because of its extreme faintness, your best chance of glimpsing it is to use averted vision. Try this: Look directly toward that spot in the sky where the gegenschein should be, then turn your eyes slowly to one side. Slowly returning your eyes to the spot, you just might be able to discern this large, albeit exceedingly faint, hazy patch.

Although the moon will not be in the sky, something that might still hurt your chances of getting a glimpse of the gegenschein is the planet Jupiter. Located in the nearby zodiacal constellation of Aries, the ram, Jupiter glows with a steady, silvery-white glow that almost mimics a headlight from an approaching jet aircraft. Its glow might be just enough to keep the elusive counterglow out of sight Nonetheless, if you're blessed with an extremely dark and clear night, give it a try. As the old saying goes, nothing ventured, nothing gained.