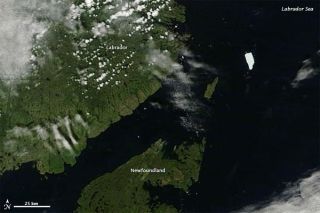 The remnant of an ice island that broke off of Greenland's Petermann glacier in August of last year continued drifting southward in the Labrador Sea this month, NASA satellite images show.

The chunk of ice, called the Petermann Ice Island-A (PII-A), is the remnant of a 97-square-mile (251-square-kilometer) ice island that calved off the Petermann Glacier along the northwestern coast of Greenland in August 2010. That ice island was about four times the size of Manhattan and the largest Arctic iceberg to form in 50 years .

By this month, PII-A was roughly the size of just one Manhattan, and the Canadian Ice Service reported that the ice island continued losing mass through breakup and melt.

Petermann Glacier is one of the two largest remaining glaciers in Greenland that terminate in floating shelves. The glacier connects the great Greenland ice sheet directly with the ocean. When the chunk of ice four times the size of Manhattan broke off, the Petermann Glacier lost about one-quarter of its 43-mile- (70-kilometer-) long floating ice shelf, according to researchers at the University of Delaware.

When the Moderate Resolution Imaging Spectroradiometer (MODIS) on NASA's Terra satellite captured this natural-color image on July 27, PII-A was about 40 miles (60 kilometers) northeast of Newfoundland. The ice island continued to pose a potential hazard to shipping lanes and offshore oil rigs, according to news reports.