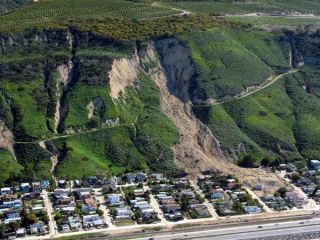 Hitting closer to home than some may realize: In January of 2005, a landslide struck the community of La Conchita in California, destroying or seriously damaging 36 houses and killing 10 people. Newly-developed listening devices may help better predict landslides.
(Image: © Mark Reid, USGS.)

Predicting the movements of mountains is tricky business, but new landslide-monitoring devices are putting an electronic ear to the ground, listening for ominous sounds from inside a slope to better anticipate an impending collapse.

Scientists have long known that underground acoustics can be tied to the sometimes deadly lurching on the surface of the Earth, but they don't know how to interpret the sounds produced by shifting layers of soil.

The big breakthrough, said Neil Dixon, a professor of geotechnical engineering at Loughborough University in England, came when he and fellow engineers developed their own sound system that can quantify what they hear and link those noises to soil-displacement rates.

"We developed a calibrated system," Dixon told OurAmazingPlanet. "So if we get a certain amount of acoustics, we can say how fast the slope is moving."

Dixon said the system can monitor in real time the subtle, below-ground movements that can indicate a landslide is imminent a contrast to many current monitoring systems that require excursions to hillsides to read and interpret the results.

The acoustic monitoring system, developed by the Loughborough team in conjunction with the British Geological Survey, supplies the underground soil with a simple musical instrument for it to play when layers shift: gravel.

Long steel tubes are placed in boreholes deep enough to reach the most unstable layers in a precarious hillside. The boreholes can be hundreds of feet deep, depending on the geological stability of an area. The tubes are then surrounded by a layer of gravel.

As layers of earth shift inside a slope , they grind the gravel. A sophisticated modeling system interprets those noises, and sends the results to computers.

"The beauty of this is it uses cheap gravel," Dixon said. Some gravel is better than others, Dixon said, but a simple laboratory test can calibrate almost any type of gravel for sound-sensing, "so you can use local materials."

To be sure the noise-sensing devices aren't picking up on the sounds of cars going by, or other interfering noises, the system relies on very high-frequency sound waves, Dixon said. They prevent false alarms, he said.

The new system can even alert authorities by text message if a slope suddenly exhibits signs that it may make a dramatic move.

The number of acoustic monitoring devices required to provide accurate data on a given hillside is usually fewer than 10 and sometimes just one.

Although the new technology is currently being considered as a means to help maintain infrastructure in the United Kingdom keeping tabs on hillsides and bridges for railways and cars Dixon said it potentially could be used in the many countries around the world where landslides claim thousands of lives annually.

In the United States alone, landslides kill 25 to 50 people every year, according to the U.S. Geological Survey, and cause a billion dollars in damage. The numbers are dramatically higher in the developing world.

Dixon said the latest breakthrough in the acoustic landslide-monitoring project is a battery-operated device, which doesn't require a central computing system. Dixon said this means the devices could potentially be installed in more-remote areas, perhaps in a dangerous slope above a village.

"Even if it only gave a warning of tens of minutes," Dixon said, "still you could evacuate people."