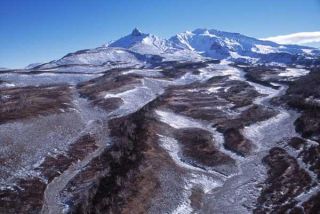 The rough beauty of the mountains of Kamchatka, in Siberia, belies the incredible biodiversity of this cold, volcano-pocked landscape.
(Image: © Darren Jew / WWF-Canon.)

He didn't have to travel far for his bucolic adventure Losiny Ostrov (Russian for "Elk Island") is a forested area mostly within the city of Moscow, just 18 miles (29 kilometers) from the Kremlin. The park, established in 1983, is vast, almost 45 square miles (116 square kilometers).

But although the park is practically on Moscow's doorstep, it and most other national parks in Russia are little more than a blip on the radar of Russians' consciousness, says Vladimir Krever, biodiversity program coordinator for the World Wildlife Fund's Russia branch.

"Unfortunately, we don't have the same feeling about protected areas as they have in U.S.," Krever said. Until the 1980s, he added, "we didn't have national parks in Russia at all."

These feelings may be slowly changing with the announcement last month that more areas will become federally protected, including the habitats of some of Russia's most iconic species.

Although the Russian tradition of protecting natural areas extends back to the times of the czars, most such regions were maintained as hunting grounds for the elite or as pristine nature reserves. Either way, they were off-limits to ordinary people and as the saying goes, out of sight, out of mind.

"This is a problem for us," Krever said, "so this is why education and public campaigns are very important for Russians."

The Kremlin seems to be paying attention to WWF Russia's push for expanding national parks and protecting the myriad species that live in the wildly divergent climate zones of the world's largest country.

Following a joint WWF-Nature Conservancy-MAVA foundation report on the species inside Russia that need greater protection, the government announced plans last month to expand federally protected lands by more than 14,500 square miles (38,000 square kilometers), an area almost half the size of South Carolina. [See a map of Russia's current and proposed protected areas, and images from the the parks.]

If, as announced, nine new nature reserves and 13 new national parks are indeed established by 2020, federal protected areas will make up 3.22 percent of Russian territory.

Home of the tigers

Conservationists say the new parks will provide much-needed protection for some of the country's flagship species, including walruses, polar bears and sea otters, and especially for the extremely endangered Amur tiger. Only around 450 of these animals, also known as Siberian tigers, are still alive.

"This is a really important step to protect the habitat for tigers ," said Sybille Klenzendorf, managing director of the WWF's species conservation program. "The tiger is in really dire straits right now."

The Russian Far East is one of the largest contiguous habitats for tigers. In the Amur Valley's cold and remote forests, prey is scarce, and each tiger needs plenty of territory where it can roam in search of food. About 150 square miles (400 square kilometers) is required for each tiger for the species to maintain a viable population, Klenzendorf said.

Krever said three new national parks have been created in Amur tiger range, and about 20 percent of the animals' habitat is now under protection.

Although last month's announcement expanded the list of federally protected lands, some of the regions are already designated protected areas and are simply changing hands from regional authorities to the central government.

Krever said he hopes that as the number of national parks increases, public appreciation will increase as well. But, he acknowledged, national parks in Russia are a new idea. It's hard to fight against attitudes developed over the decades when people had little access to many nature preserves.

"I hope that now we have enough reasons to explain to our people why protected areas are important, and why we must create them," Krever said.