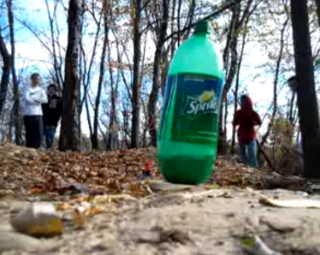 A group of teens detonates a drano-and-aluminum "bottle bomb" on YouTube. The mixture produces hydrogen gas, which expands until it pops the soda bottle
(Image: © BlackIce700)

An apparent science experiment gone wrong ended in arrest in Bartow, Florida on Friday, as a mixture of household chemicals in a water bottle caused a minor explosion on school grounds.

According to the Miami New Times, 16-year-old Kiera Wilmot was curious to see what would happen if she mixed toilet bowl cleaner and aluminum foil. What happens, it turns out, is a minor "pop" capable of blowing the cap off an 8-ounce water bottle — and attracting the attention of a school resource officer. Wilmot has been charged with possession and discharge of a weapon on school grounds. She was also expelled. The bottle explosion was caused by hydrogen chloride or sodium hydroxide in the drain cleaner reacting with the aluminum foil, causing a build-up of hydrogen gas.

The case has attracted plenty of online attention, with many defending Wilmot, who otherwise has no disciplinary record. But the Polk County School District is standing by its punishment, releasing the following statement: "In order to maintain a safe and orderly learning environment, we simply must uphold our code of conduct rules. We urge our parents to join us in conveying the message that there are consequences to actions." Even extracurricular science experiments, it seems.