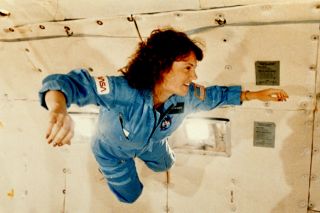 The "Vomit Comet" refers to a NASA program that introduces astronauts to the feeling of zero-gravity spaceflight.

Recruits climb aboard a specially fitted aircraft that dips and climbs through the air to simulate the feeling of weightlessness in 20- to 25-second intervals.

According to NASA, its "reduced gravity" research program started in 1959. NASA has flown several types of aircraft over the years, perhaps most famously the KC-135A aircraft that is now retired.

A typical flight will see two to three hours of plunging arcs, giving astronauts about 30 or 40 chances to experience weightlessness when the airplane drops to a lower altitude. Some researchers also use the flights as a chance to run experiments in weightlessness.

The program is a good platform for students in particular, as the costs for these flights are far lower than flying an experiment on a space mission.

The actors of the movie "Apollo 13" — Tom Hanks, Kevin Bacon and Bill Paxton — were probably the most famous visitors on the KC-135A parabola flights in the 1990s.

Set designers created a spacecraft interior adapted to the inside of the airplane, then the cameras captured shots on film — in less than 30 seconds of acting at a time. Director Ron Howard leased the aircraft over six months to achieve the weightless shots viewers see in the film.

If you're itching for a parabola flight yourself, Zero G Corp. also offers opportunities for tourists to take a ride. Be prepared to save for a while, though: Tickets are more than $5,000 a person.