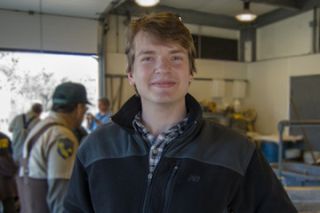 Scott Fortmann-Roe's work relates to many aspects of modeling and simulation. He builds simulation models, develops software for model construction and studies techniques to assess model results. He is the creator of Insight Maker, an open source simulation and modeling platform with more than 13,000 registered users. This free tool allows users to build simulation models right in a browser and share them with others with the click of a button. A National Science Foundation Graduate Research Fellow, he is currently writing a book, Beyond Connecting the Dots, on systems thinking and modeling.

A big draw of this field is its diversity. Modeling and simulation work apply to many different subjects in both the "soft" and "hard" sciences. What's more, a single problem often requires weaving together different domains to tackle it in an interdisciplinary manner.

I've always had wide-ranging interests and so this is a good match for me. Working in this arena lets me indulge my passions and explore many fascinating problems across a spectrum of disciplines. It's incredibly exciting!

No one hits home runs all the time. More than one idea that sounds great on paper has failed dismally when implemented. However, it is often hard to admit failure and it is all too easy to become stuck in a rut trying to make some unobtainable research result work. Hundreds or thousands of hours can be stubbornly spent on a dead end.

Rather than trying to force the dead ends to work, it's best to embrace failure and move on. The number of successes in research is directly proportional to the number of failures. The quicker you can move through failures, the more successes you'll have.

I was always experimenting with my family's computer to see what I could make it do. Sometimes things did not go so well. I still remember once having to spend months of my allowance to have the computer repaired after I broke it beyond my ability to fix it.

When Michelangelo created the sculpture David, did he, as he claimed, simply remove the excess marble to discover the figure that was already there? Or did he wield the hammer and chisel to make real a vision he had held first in his mind?

There are two fundamental joys to being a researcher: discovery and creation. Some researchers focus on discovery: revealing beautiful truths that had previously been hidden. My work focuses on creation and it is what I love. Taking what is in my mind and making it a concrete reality is what gets me going each morning.

Research work can require a single-minded attention to break through the countless problems and distractions that can appear. It's very easy to lose perspective on the motivation and importance of the work being done. Every piece of research sits within a broad context and without an awareness of that context the work itself is likely to suffer. Perspective is also part of knowing when to quit working on a fruitless direction. So it is very important to maintain a perspective of the bigger picture even while single-mindedly focusing on a problem.

Constructing models and simulations is something that has traditionally not been accessible to most people. It is generally the domain of a specialized community.

This can lead to a situation where the people most affected by a specific model do not understand the model, have no input in to the development of the model and might not even know the model exists! I think this does a disservice both to science and society as whole. If modelers do not hear the voices of the people affected by a model, they may miss important perspectives or pieces of information that could improve the resulting modeling work.

To change this, my research is focused on making modeling as accessible as possible. To this end I have developed Insight Maker to allow anyone to build a model and then share it with others to get their input. One thing I firmly believe is that the more diverse voices we hear in the modeling process, the better the resulting models will be, the better our science will be, and the better the outcomes for society as a whole will be.

My work and thinking has been shaped by many people. However, one source stands out right now: the book The Lean Startup by Eric Reis. This may seem odd as Reis isn't a scientist and his book at first glance has nothing to do with science. Rather the book is a guide and manifesto for creating start-up companies, primarily in the technological field, that are as agile and flexible as possible.

Reading it has greatly affected how I view the research process. Although the book is about companies, its lessons can be applied to research work, the key take home messages being:

People have the intuitive feeling that the more complex a model is the better it is. Surely, they think, the more things a model takes into account, the better a model will be at making predictions. Take, for instance, a model of global climate change. Isn't a climate change model that includes a simulation projecting human fuel consumption into the future going to be more accurate than a model without this simulation?

The answer is: it depends. It depends on how accurately you can simulate fuel consumption and how strongly it affects the model results. Adding a mechanism to a model — even if you know it matters in reality — can in fact make the model worse if you cannot accurately model or estimate its effects.

Often, in practice a simpler model may have more predictive accuracy than a more complex one. Complexity should never be seen as a proxy for quality.

My computer. It contains everything from my work: the data files, applications and the computer code. In fact, my computer effectively is my office. I can work from anywhere where I have a power plug and an Internet connection.

Classical music helps me relax and focus but it doesn't always do the trick. Sometimes Latin pop music is the only thing that works.