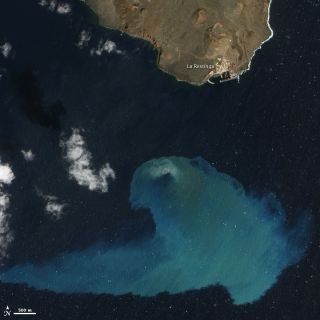 Rumblings at El Hierro volcano have quieted, allaying fears of a new underwater eruption at the Canary Islands peak.

Today (April 10), the government's volcano monitoring agency (Pevolca) lowered the volcanic risk to green, or normal. The announcement follows the gradual decrease in earthquakes since April 5 and lower carbon dioxide gas emissions since April 1, the agency said in a statement.

El Hierro, an underwater volcano just offshore of the island of El Hierro, has rattled residents with more than 2,300 small quakes since March 18, the largest of which, a magnitude 4.9, struck on March 31. The earthquakes, rising gas emissions and deformation on part of the island suggested magma was rising toward the surface. On March 27, Pevolca closed a railroad tunnel and some roads because of landslide risks. Today's announcement reverses the closures.

The underwater volcano sprang to life in late 2011, captured in a spectacular space image from NASA (see above). The eruption severely affected island fisheries and forced many people to evacuate.