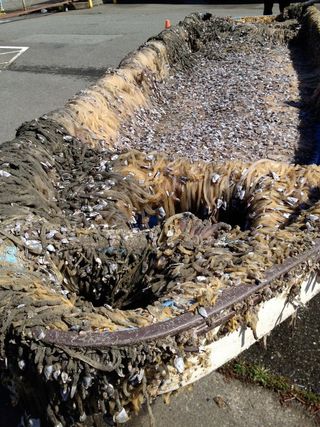 A possible piece of tsunami debris from the 2011 Japan earthquake was discovered Sunday night (April 7) on a Northern California beach.

The skiff has several numbers and Japanese writing hiding under the massive pile of tubular gooseneck barnacles encrusting the top and sides. It washed ashore about a mile north of Crescent City, where 12 people died in a 1964 tsunami caused by an earthquake in Alaska.

The boat is not radioactive, according to a Facebook post by the Redwood Coast Tsunami Work Group at Humboldt State University. Scientists with the group plan to test whether the barnacles are native to the Western Pacific, the Eureka Times-Standard reported.

Photos of the boat were sent to the National Oceanic and Atmospheric Administration (NOAA), which collects and verifies reports of tsunami debris. Of the roughly 1,690 official debris reports submitted to NOAA, 25 items have been confirmed as definite Japan tsunami debris, the newspaper said.

The devastating Japan earthquake and tsunami dumped 5 million tons of debris into the Pacific Ocean. About 1.5 million tons were set adrift, including two floating docks that beached in Washington and Oregon. In March, live fish were discovered inside a boat washed up in Washington.