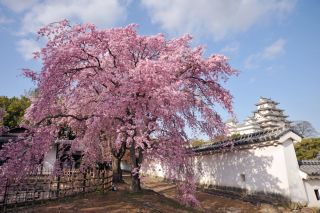 In 1912, Japan gave more than 3,000 cherry-blossom trees to the United States as a gift to honor the growing bond between the two countries. Now, the annual National Cherry Blossom Festival in Washington, D.C., commemorates this century-old offering of goodwill when the trees bloom each spring.

The flowering trees in Washington, D.C., "symbolize friendship between nations, the renewal of spring and the ephemeral nature of life," according to the U.S. National Park Service. But what is the cultural significance of cherry blossoms to Japan?

Similar to Washington, D.C., Japan has a yearly flower-viewing celebration called hanami, where thousands of people hold feasts under blooming cherry-blossom trees, or sakura. This tradition is over a thousand years old.

In Japan, cherry blossoms also symbolize the transience of life, which is a major theme in Buddhism. The cherry-blossom tree is known for its short but brilliant blooming season, a natural process that metaphorically describes human life.

A fallen cherry blossom symbolizes a fallen samurai who sacrificed his life for the emperor. During World War II, the flowers took on a similar meaning when they were painted on the side of kamikaze warplanes.