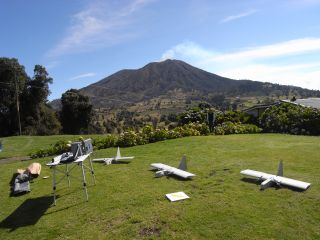 The Dragon Eye remote-controlled plane weighs in at just under 6 pounds (2.7 kilograms), with a 3.75-foot (1.14 meters) wingspan and two electric motors. Designed for the U.S. Marine Corps, the plane is light enough to carry and launch for reconnaissance.

"It is very difficult to gather data from within volcanic eruption columns and plumes because updraft wind speeds are very high and high ash concentrations can quickly destroy aircraft engines," David Pieri, the project’s principal investigator and a research scientist at NASA's Jet Propulsion Laboratory in Pasadena, Calif., said in a statement. "Such flight environments can be very dangerous to manned aircraft."

The Dragon Eye flights were coordinated with an overhead pass of NASA's Terra satellite, so onboard satellite data could be compared with information collected via the unmanned planes. The study will improve models of volcanic eruption plumes from Terra satellite data.

The unmanned aerial vehicles carried a 1-pound (0.5 kg) sensor payload above the volcano's summit, with flights ranging as high as 12,500 feet (3,810 m) above sea level, according to a NASA statement. Researchers launched 10 flights between March 11 and 14.

NASA scientists plan to return to Turrialba next year with a larger plane, the SIERRA unmanned aircraft (a 100-pound payload, or 45 kg), to measure additional gases in volcanic fumes, NASA said.