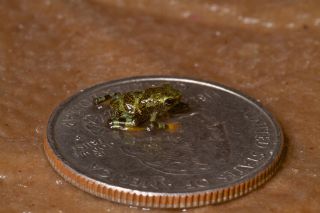 Scientists have successfully bred a certain type of endangered Panamanian amphibian — the limosa harlequin frog — for the first time.  The development is key because populations of the itty-bitty frog, which is smaller than a quarter as a baby, are declining in its native country.

"This new generation is hugely inspiring to us as we work to conserve and care for this species and others," said Brian Gratwicke, international coordinator for the project and a research biologist at the Smithsonian Conservation Biology Institute, one of six partners in the effort.

To get the small amphibians to mate, researchers went to great lengths. They built a rock platform to mimic the underground caves in which the frogs breed, and piped in oxygen-rich water between 72 and 75 degrees Fahrenheit (22 and 24 degrees Celsius), according to a release from the Smithsonian Conservation Biology Institute.

Young frogs only feed on algal mats coating rocks. So scientists with the Panama Amphibian Rescue and Conservation Project, which bred the frogs, also painted the rock platforms with spirulina algae and then let it dry. When placed inside the enclosure, the algae grew  and fed the animals.

Young frogs can fit easily on a U.S. quarter with room to spare, and adults don't get much bigger, growing to slightly larger than an inch in length.

For all their trouble, the scientists were rewarded with hundreds of tadpoles from one pair of frogs, and nine youngsters from another, the release noted. These frogs are of the "chevron-patterned" variety; there are also plain-colored forms of limosa harlequin frogs that scientists are trying to breed.

The frog is threatened by habitat loss, development, water pollution and climate change, according to the International Union for Conservation of Nature. Amphibians are also threatened by chytridiomycosis, a fungal disease that kills the animals; due in part to the disease, up to one-third of amphibian species are threatened worldwide.

The frogs will eventually be released into the wild, where the scientists hope they will help replenish the animal's dwindling numbers.