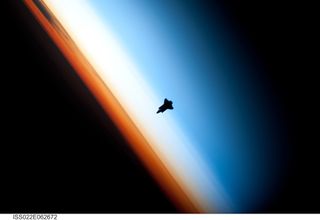 Silhouetted against Earth's atmosphere, the Space Shuttle Endeavour cuts a striking figure in this 2010 photo taken from the International Space Station. The shuttle approaches the station against a backdrop of the layers of the atmosphere. The blue layer directly behind the shuttle is the mesosphere, and the white layer is the stratosphere. Below that is Earth's troposphere, the lowest portion of the atmosphere, seen in orange.
(Image: © Expedition 22 Crew, NASA)

Laura Woodmansee is a writer based in Southern California. She holds an M.S. in Journalism from USC’s Annenberg School for Journalism and is the author of the books "Women Astronauts", "Women of Space: Cool Careers on the Final Frontier", and "Sex in Space". She contributed this piece to LiveScience’s Expert Voices: Op-Ed & Insights.

Sex in space is obviously one of those topics that gets people giggling, but it has a serious side too. If we are going to venture out into space, and really live there, then people are going to do everything they do on Earth — including having sex and making babies.

Seven years ago, I wrote a book called "Sex in Space." The idea came from previous book interviews I did with women astronauts like Sally Ride and Shannon Lucid. After talking with them about the challenges of being a female on the Space Shuttle and International Space Station, I became interested in what the next step of human space exploration would look like.

I felt then, and still do today, that it's important for any spacefaring society to discuss sex and reproduction beyond Earth. To put it simply, we need to know exactly what we're getting into because the consequences affect not only us, but the next generation of human beings.

Although we've been studying the health of astronauts in orbit for fifty plus years, we’ve never really looked into how the human reproductive system responds to the microgravity of Earth orbit, the low gravity of the Moon or Mars, or the hyper-gravity of a giant planet. It's an understandably sensitive topic, especially for a public agency such as NASA or the ESA.

The news that University of Montreal researchers found that reproductive processes in plants were affected by changes in gravity is very important because it gives us a clue as to how the human reproductive system might react to micro- or hyper-gravity. That study only increases my concern that there could be trouble ahead for babies conceived in space, as well as for the mothers.

According to the University of Montreal study, changes in gravity affect both the "traffic flow" and the formation of the cell. Can you imagine how those kinds of changes would affect a human embryo? At this point in time, I hope that no one would want to do that experiment.

Couples going on space vacations are bound to want to have a good time. Maybe space tourism companies ought to consider banning conception in orbit. I realize this may seem extreme. But consider the fact that doctors prescribe medications with warnings about pregnancy. Maybe spaceflight ought to come with a warning label: 'Don’t get pregnant in space.' Sex in space education anyone? Just a thought . . .

The research that has come out today on plant sex and conception in space highlights the fact that we simply don't know the impact space conditions would have on human conception and pregnancy. Right now, it would be unethical to conceive a baby in orbit, or even risk conception. That’s my bottom line.

Laura blogs at LauraWoodmansee.com and at the newly created StarryGoodness.com.