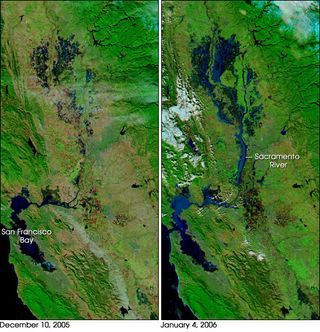 This pair of images shows flooding in the Sacramento-San Joaquin Valley region inland of San Francisco Bay. The image on the left was captured by the Moderate Resolution Imaging Spectroradiometer (MODIS) on NASA’s Aqua satellite on December 10, 2005, while the image at right was captured on January 4, 2006, just days after severe storms passed through.
(Image: © NASA Earth Observatory)

A mission to map Earth's water from space starts with a small passenger plane flying over California's Sacramento River.

The ongoing flights, including one planned for Friday (March 8), are helping scientists fine-tune a precision radar system called AirSWOT ( Air Surface Water Ocean Topography) for the mission. The radar will fly aboard the SWOT satellite planned for launch in 2020, said Delwyn Moller, a radar engineer at NASA's Jet Propulsion Laboratory in Pasadena, Calif., who helped design the radar.

"AirSWOT is an instrument that is going to map the surface topography of water, both for the oceans and for freshwater," Moller told OurAmazingPlanet. "This is a very new concept," she said.

The SWOT satellite aims to solve a critical problem: No one knows how much freshwater there is on Earth. "We don't know where all the water is and where it's going," Moller said.

SWOT will measure the surface height of water to within 4 inches (10 centimeters) on land and 0.2 inches (0.5 cm) over the deep oceans, covering a swath 75 miles wide (120 kilometers). While surface height doesn't say how much water is stored in reservoirs, the AirSWOT tests are designed to help scientists develop software for the satellite to calculate river flow rates and to monitor coastal ocean currents, among other jobs. With this information SWOT could estimate, for example, how much water floods the Amazon River basin each year, Moller said. [The World's Longest Rivers]

While researchers have been fine-tuning the radar system on the ground for years at sites around Sacramento, the first science flights with the instrument are planned for April, said Walter Klein, a mission scientist at NASA's Dryden Flight Research Center in Palmdale, Calif.

Along the Sacramento River, the U.S. Geological Survey will set out water-level sensors and monitor the river's flow by boat, to calibrate the measurements taken by air, said Toby Minear, a hydrologist with the USGS California Water Science Center in Sacramento.

The 400-mile-long river drains into San Francisco Bay, passing through California's capital and watering millions of acres of agricultural land and wildlife refuges. The flat-lying drainage near Sacramento includes two flood bypasses, the Yolo and the Sutter, as well as levees, to control seasonal flooding. The position of freshwater in its delta, where the river merges with the San Joaquin River and flows into San Francisco Bay, depends on ocean tides, which propagate upstream.

The AirSWOT trials will give the USGS a comprehensive snapshot of the river, including upstream areas such as the Yolo Bypass, where it's notoriously difficult to get an estimate of surface elevation, Minear said. The Yolo Bypass is one of two flood bypasses for the region, which can undergo severe floods in wet years. The data will help with flood modeling and prediction, as well as understanding the effects of tides on the river basin, Minear said.

"The ability to map water surface elevations over a really large area relatively quickly is very unusual," Minear told OurAmazingPlanet. "Things like flood plain inundation and flood modeling stand to be turned on their head to the way we usually do them, and to me that's the most exciting part."