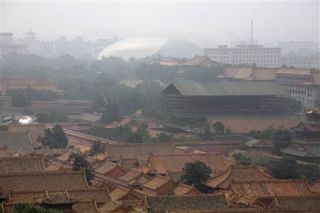 A view of the Forbidden City and the egg shaped National Theater is seen on a hazy day in Beijing, Thursday, July 31, 2008. China announced Thursday a raft of emergency measures it would take if skies don't clear up further for the Olympic Games, including more factory shutdowns and further restrictions on cars.
(Image: © AP Photo/Ng Han Guan)