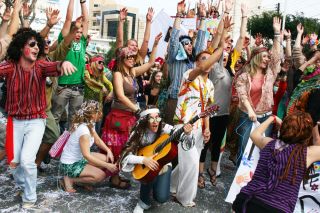 Should you disclose your hippie past? Revealing past drug use to teens, even to describe your regrets, could lead them to hold more tolerant attitudes about drugs
(Image: © ruzanna | Shutterstock.com)

Discussing the regrets of past drug use may seem like a good way to convey the dangers of drugs, but the move could backfire, according to a new study.

Children of parents who disclose past alcohol, drug or tobacco use are more likely to have more positive views about drugs than peers whose parents don't, according to a study published online Jan. 25 in the journal Human Communication Research. That held even if the parents were describing their regrets about drug use.

"This is a really cool article, because it does break down the dialogue" and give parents some ideas for what to say, said Michael Fendrich, a substance abuse epidemiologist at the University of Wisconsin-Milwaukee, who was not involved in the study.

But the findings are correlational, so the study doesn't show that parental honesty actually leads to drug and alcohol use amongst teens, and tying such communication to addiction or drug and alcohol abuse down the line is even more tenuous, Fendrich said.

Talking about drugs with children can be incredibly tricky, Fendrich said.

"Kids are pretty savvy, they see the picture of their mom and dad giving the peace sign on the VW bus," he said. "How do you communicate with your kids about that?"

Pretending to never have dabbled in drug use may seem deceitful, but disclosing a hippie past life isn't easy either, Fendrich said. [The Old Drug Talk: 7 New Tips for Today's Parents]

To see how parents' talk was tied to kids' drug attitudes, Jennifer Kam, a University of Illinois communications researcher, and her colleague Ashley Middleton surveyed 561 sixth- through eighth-graders on whether their parents ever mentioned past drug, alcohol or tobacco use, and whether they had regrets about it. (The study didn't distinguish between parents using illegal versus legal substances or single out addiction or problem drug behavior.)

Roughly 80 percent of the parents had disclosed past use. The teens then reported on their drug attitudes.

"The more often the parents talked about regret over their own use, the bad things that happened, and that they'd never use it again, the students were more likely to report pro-substance-use beliefs," Kam told LiveScience.

Those participants also imagined that their parents would be less disapproving if they did try drugs and also thought more of their peers did drugs. Only a tiny fraction of youngsters had used illicit drugs such as marijuana at this age, however.

The researchers hypothesize that these messages may backfire by leading kids to think "if my parents did it, it's not that bad," Kam said.

But while the findings are intriguing, they don't prove that the heart-to-heart drug talks were the cause of tolerant attitudes toward drugs and alcohol.

For one, psychological problems are strongly tied to future drug problems, but the study didn't assess students' mental health at all, Fendrich said.

It could be that kids already gravitating toward drugs lead parents to open up about their past, not the other way around, Fendrich said. "Are those parents the ones who say 'Oh, I can reach my kid if I tell them I am human just like he is?'"

And while past work has shown that attitudes about drug use predict whether teens are likely to try drugs, linking them to long-term problems is even shakier.

Some controversial studies have shown that people who experiment with drugs, but then outgrow the phase, tend to be better adjusted than teens who become addicted or those who completely abstain, Fendrich said.