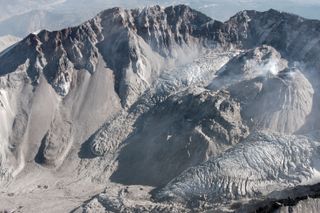 In the battle between mountains and ice, the cold stuff usually wins. Over time, glaciers can grind down tall peaks like buzz saws.

But at Mount St. Helens in Washington, a swelling lump of lava emerged the victor in a recent rock and ice face-off.

Two stunning time-lapse videos show a bulging dome in the volcano's crater shoving aside a glacier and sending it galloping out of the way. The big push came between 2004 and 2008, when the mountain squeezed out more than 125 million cubic yards (93 million cubic meters) of new lava.

The glacier, called Crater Glacier, started gathering snow and ice in the winter following Mount St. Helens' massive eruption on May 18, 1980. By 2004, it was up to 650 feet (200 m) thick and about 0.4 square miles (1 square kilometer) in size, despite the volcano periodically spewing lava, steam and ash.

Heavy winter snowfall and shading from the high crater cliffs contributed to the glacier's rapid growth, according to a United States Geological Survey report published in 2008. The ice advanced up to 3 feet (1 m) every day. And cold rocks along its border insulated the frozen stream from the thick, pasty lava, the report said.

But in 2004, a new lava dome split Crater Glacier in two, crushing it against the crater walls and doubling the thickness of the ice.

By July 2008, the USGS declared the eruption over, and the new lava dome has been relatively quiet since. The jumbled, fractured ice eventually relaxed, flowing around the dome in a horseshoe shape. Crater Glacier continues to move down the mountain, joined by two smaller glaciers on the steep cliffs nearby.