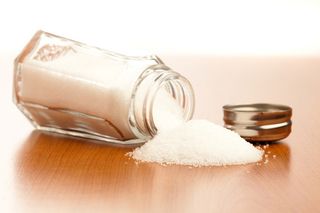 Overdoing the salt raises the risk of high blood pressure as well as heart disease and stroke. And most Americans consume way too much sodium. Currently the average person gets 3,400 milligrams of sodium a day — or almost one and a half teaspoons. The American Heart Association wants people to get a lot less — no more than 1,500 mg a day — the equivalent of a little less than two-thirds of a teaspoon.

All that white stuff doesn't necessarily come from the salt shaker. "Processed foods contribute more than 70 percent of the total sodium found in the American diet," said Dr. Linda Van Horn, a research nutritionist at Northwestern University in Chicago and spokesperson for the AHA.

To help people cut back on salt, the AHA just launched the Sodium Swap Challenge. The goal of the challenge is to help Americans reduce sodium intake over the course of three weeks by changing the foods they choose.

"The taste for sodium is a learned behavior, which means the more you eat it, the more you want it," Van Horn said. "But the reverse is also true. As you cut back on the amount of sodium you consume, foods taste saltier over time. A low-salt diet is something within your control." Here are six easy ways to jumpstart a lower-sodium life:

Read labels "We want people to read food labels and track their sodium consumption … to get an idea of how much they are eating, which I'm sure will be surprising to many people," Rachel Johnson, a spokeswoman for the AHA and a professor of nutrition and medicine at the University of Vermont, said in a statement about the Sodium Swap Challenge. Once people know just how much salt is in the foods they eat, it'll be easier to figure out how to cut back.

Replace sodium-rich foods with produce Fruits and vegetables fill you up without adding sodium to the diet. And the potassium that's found in fruits and veggies can keep blood pressure at healthy levels, too.

Break bread wisely Bread and sodium may seem like an unlikely duo, but some breads can contain a hefty amount of salt. Spend five minutes comparing breads at the grocery store, to find options that are lower in sodium, advised Van Horn. Another possibility: Trade loaf-style bread for pita bread or tortillas, which tend to contain less salt, Van Horn added.

Cut back on cured meats They're packed with sodium. "Either avoid them altogether or at least look for forms of the product that have the least amount of sodium" Van Horn said.

Rethink pizza The problem with take-out pizza: Between the dough, sauce, cheese and toppings such as olives and pepperoni, sodium can add up. To keep the sodium content down, choose lower-in-sodium sauces and cheese. Pass on the pepperoni and choose healthier toppings such as mushrooms or broccoli.

Speak up in restaurants Eating out means people don't know how the food they order will be prepared. But Van Horn said this concern can be addressed.

"Many chefs are much more accustomed these days to helping consumers stick with their recommended diets," she explained. In a fine-dining establishment, ask for a reduced-sodium option.

Minimizing sodium is more of a challenge in fast food restaurants, however, when condiments and french fries are typically prepared in bulk. In these instances, Van Horn recommended choosing a salad or plain hamburger, without the bun or condiments. Finding lower-sodium foods in fast food venues "can be done, but you have to be very selective," Van Horn said.