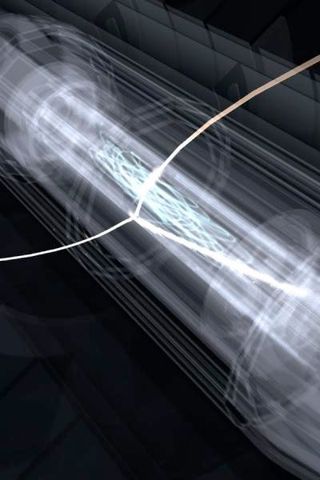 In addition to making antihydrogen easier to study, a new cooling technique could make it last longer in traps. In 2011, scientists trapped antimatter for a record 16 minutes (artist's conception shown here).
(Image: © Chukman So)

Scientists have devised a new method of cooling down antimatter to make it easier to experiment on than ever before.

The new technique could help researchers probe the mysteries of antimatter, including why it's so rare compared with matter in the universe.

Every matter particle has an antimatter partner particle with opposite charge — for example, the antimatter counterpart of an electron is a positron. When matter and antimatter meet, they annihilate each other.

"The ultimate goal of antihydrogen experiments is to compare its properties to those of hydrogen," physicist Francis Robicheaux of Auburn University in Alabama said in a statement. "Colder antihydrogen will be an important step for achieving this."

That's because antihydrogen atoms are usually relatively hot and energetic, which can distort their properties when measured.

Robicheaux is the co-author of a paper describing the new cooling method published today (Jan. 6) in the Journal of Physics B: Atomic, Molecular and Optical Physics.

The new technique relies on using precision laser beams to "kick" antihydrogen atoms, knocking loose a bit of energy from them and cooling them down. The process should be able to cool antihydrogen atoms to temperatures 25 times chillier than ever before.

"By reducing the antihydrogen energy, it should be possible to perform more precise measurements of all of its parameters," Robicheaux said. "Our proposed method could reduce the average energy of trapped antihydrogen by a factor of more than 10."

But to cool down antimatter, scientists must first trap it. This is difficult, because antimatter particles would be destroyed if they touched walls made of matter. Thus, researchers use complicated systems of magnetic fields to contain antimatter.

In addition to making antihydrogen easier to study, the new cooling technique could make it last longer in traps. In 2011, scientists at the European physics lab CERN trapped antimatter for an amazingly long 16 minutes, setting a record.

"Whatever the processes are, having slower moving, and more deeply trapped, antihydrogen should decrease the loss rate," Robicheaux said.

The researchers haven't tried the new tactic out yet on actual antimatter atoms, but they used computer simulations to show that it's possible. Their calculations suggest that the particles can be cooled to around 20 millikelvin; in contrast, most trapped antihydrogen atoms have temperatures of up to 500 millikelvin.

"It is not trivial to make the necessary amount of laser light at a specific wavelength," Robicheaux said. "Even after making the light, it will be difficult to mesh it with an antihydrogen trapping experiment. By doing the calculations, we've shown that this effort is worthwhile."