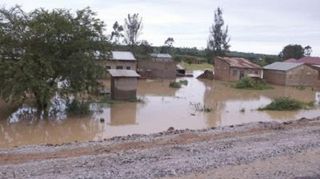 The amount of rainfall affects the number of infant infections leading to hydrocephalus in Uganda.
(Image: © Steven Schiff, Penn State)

Right before and after the rain seasons peak in Uganda, cases of infection-caused hydrocephalus in infants spike, according to a study that shows how certain climate conditions can drive the spread of contagions.

"Hydrocephalus is the first major neurosurgical condition linked to climate," Steven J. Schiff, the director of the Penn State Center for Neural Engineering, said in a statement. "This means that a substantial component of these cases are almost certainly driven from the environmental conditions, and that means they are potentially preventable if we understand the routes and mechanisms of infection better."

The disorder is characterized by the build-up of brain fluid, which can lead to damaging or fatal brain swelling. There are believed to be more than 100,000 cases of post-infectious hydrocephalus each year in sub-Saharan Africa, the majority of which occur in newborns who had suffered from neonatal sepsis, researchers say.

For this study, Schiff and colleagues tracked 696 hydrocephalus cases in Ugandan infants between 2000 and 2005. For the same time frame, the team analyzed rainfall data obtained through National Oceanic and Atmospheric Administration (NOAA) weather satellites.

Hydrocephalus cases rose significantly at four different times throughout the year — before and after the peak of both the spring and fall rainy seasons, when the amount of rainfall was at intermediate levels, or about 6 inches (15 centimeters) per month, the researchers said.

Though the full spectrum of bacteria causing hydrocephalus in so many infants is not known, the team noted that the weather affects conditions supporting bacterial growth, and that the amount of rain can reduce bacterial infections.

The study was detailed in a recent issue of the Journal of Neurosurgery: Pediatrics.