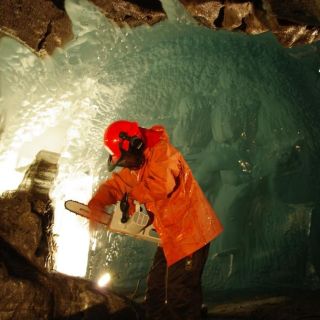 Nearly 700 feet (more than 200 meters) under the Svartisen glacier in northern Norway, researchers are huddled together underground. In the world's only lab located inside one of these giant hunks of ice, they are carrying out some of the best experiments on the movement and composition of glaciers ever done.

The lab, operated by the Norwegian Water Resources and Energy Directorate, is located above the Arctic Circle. It started out as a tunnel for hydropower, but then researchers persuaded the hydropower company to dig out one small extra tunnel just for them and created a valuable in-site lab.

Normally to get access to the base of a glacier, it is necessary to drill a borehole through the ice. Doing so involves a huge logistics operation and also means that researchers can work only where the surface ice isn't too badly cracked. Using the new lab, researchers can visit exactly the same location at the glacier bed each time — and it's much easier for them to get access to the base.

But the in-site lab comes with its own set of challenges.

To access the remoteworkspace, researchers have to fly to a small northern Norwegian town, then drive for hours, take a ferry, walk along a dirt road and up a mountain. From the entrance to the tunnel, it's another mile-plus trek up a set of stairs to the lab. It's a one-hour walkin total when conditions are good, but when there is fresh snow to trudge through on the way to the entrance, the slog can take four to five hours. [See images of the glacier lab .]

To get to different parts of the glacier bed to study how the ice slides over the rock beneath, the researchers melt additional 30- to 40-foot-long (9 to 12 m) tunnels using hot water. "The water is heated up in a large hot-water heater that is in the main tunnel. The hot water is then pumped up the ice tunnel," said Miriam Jackson, asenior research scientist and glaciologist with the directorate. Melting a glacier from the inside out isa slow process — creating one ice tunnel takes around 24 to 48 hours.

Working under the glacier instead of the cold surface protects the researchers from some challenges, but it's still a tough environment.

"Some people find the stress of being in the tunnel system a challenge, and although this is unusual, tempers can occasionally fray, especially for groups that have limited experience of glaciological fieldwork," Jackson said.

Once in the lab, the scientists continue their work in trying to get a read on how glaciers move and how they drain throughout the year, as well as how glaciers impact sea level rise by contributing melt water to the oceans. The laboratory is also being used to test and develop theories about the seismic signals — similar to those measured from earthquakes — that moving glaciers send.

"We can put the seismic instruments in the tunnel system, they are a lot nearer to the base of the ice, whereas normally scientists must put the instruments on the surface, even when they are studying what is happening at the base," Jackson told OurAmazingPlanet.

The team only does research in the wintertime to avoid meltwater, and the research area has room for up to six people sharing four bedrooms, a kitchen, bathroom and a shower in addition to three laboratories, a walk-in freezer, a workshop and a water heater. Most of the time there are only three to four people in the labfor a period of six to seven days between November and April.

The ice tunnel labs provide the researchers with more than just a research site, though.

"One of the most surprising things is the beauty," Jackson said. "Each time we melt out an ice tunnel it is equally entrancing."