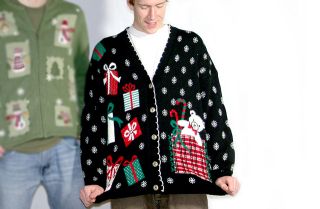 Tired of getting Christmas sweaters from grandma? It's okay to have a nice lunch with her instead, experts say.
(Image: © The Ugly Sweater Shop | Flickr.com)

For all of recorded history, people have been giving presents for a myriad of reasons: to show affection, curry favor, or fulfill familial duty. And the custom goes beyond the human species. Even family cats are known to bequeath presents of dead mice or birds on their owners.

"It's an act of social communication," said SunWolf, a communications professor at Santa Clara University. "Without using words, you're always saying something: 'I wish we could be closer, I think of you, I miss you.'"

But figuring out how to translate your love for someone else into that perfect gift can be stressful. Here are some tips for making gift-giving a joy for both the giver and the receiver.

Get one big present

A big present looks more impressive when it stands on its own, according to a study reported last year in the Journal of Consumer Research. Putting a tube of lip balm in with the cashmere sweater will make gift-givers view the present less favorably.

That's because people tend to average out the value of the present, making the whole package seem cheaper.

Buying something straight off a person's wish list may seem lazy, but it may be the safest strategy, said Nicholas Epley, a psychologist at the Booth School of Business at the University of Chicago.

Epley's team has found that when people receive a gift they like, they didn't actually care whether someone put a lot of careful thought into selecting it.

His team conducted a study at the Museum of Science in Chicago where people were asked to either randomly select or carefully choose a high-rated or low-rated present from the gift shop for another person. Those who got coveted items didn't think much about the giver's intentions. [Geeky Gifts: Holiday Guide for Science-Lovers]

"What we found is that a gift giver's thoughtfulness, or how thoughtful you thought the gift giver was, counted only when you got a crappy gift," Epley told LiveScience.

Put some thought into it

But despite the fact that a good gift needs no context, getting a thoughtful gift does have benefits — for the giver.

Givers who were asked to think carefully about a gift choice felt closer to the receivers than those who were asked to pick randomly, Epley said. That held even when givers were offering presents to random strangers.

"Perspective taking, or imagining being in another person's shoes, makes you feel closer to the person," he said.

But mention the thought

Thoughts do wind up counting when you get a bad gift, Epley found. For instance, when the museum visitors in his study received a low-rated ruler that said "Rulers of Science" on it, they were more likely to appreciate the gift if they were told how the giver had thoughtfully selected it.

So it might be good to write a little note on that card to Uncle Marv describing why that life-size replica of George Washington made you think of him.

"The practical message of this is not that you shouldn't put thought into a gift. You shouldn't assume your thoughts will count like you think they do or that people will magically know how thoughtful you are," Epley said.

Agree to opt out

It's also okay to stop giving gifts, even if you have done so in the past. That friend you met in 1989, the grandmother who knits progressively uglier sweaters, or the co-worker who you don't know very well — if thinking about giving or receiving is stressful, it's okay to not give a gift as long you communicate it clearly, SunWolf told LiveScience.

"Just like any relationships that don't work anymore we need to have an exit strategy," she said. Instead, come up with an alternate way of showing you care, like telling grandma "The gift giving thing isn't necessary anymore grandma, I'd be happy with just having lunch with you."

There's also regifting — recycling a gift you've received previously — which new research in the journal Psychological Science suggests may not be as offensive as once thought, at least to the gift giver. To improve acceptance of regifting, the researchers suggested voicing your feelings when recycling a present, even expressing to the receiver that it's OK for them to do what they like with the gift (even if that means passing it along next year).