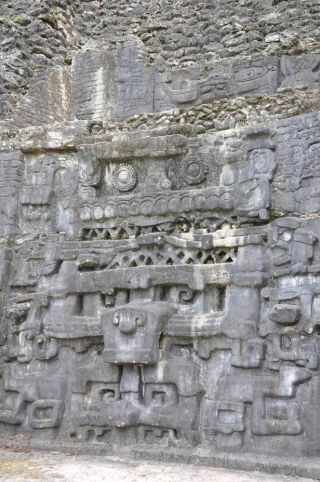 An example of the elaborate stone carvings made by Classical Mayans. This frieze is in Caracol, Belize.
(Image: © Douglass Kennett, Penn State)

Despite a flood of debunking from news agencies and NASA, belief in the upcoming Mayan apocalypse is apparently still going strong.

From China to the Americas, people are reacting to the alleged doomsday with more fear than skepticism, according to multiple news reports. Space agency NASA is fielding hundreds of concerned calls, and hundreds of members of a religious group in northwest China have been arrested for spreading doomsday rumors.

All this despite the fact that the Mayan apocalypse is not going to occur. The doomsday rumors arise from a misunderstanding of a calendar used by the ancient Maya, whose civilization crumbled in about A.D. 900. The date, Dec. 21, 2012, on the modern calendar likely correlates to the final day of the 13th b'ak'tun on the ancient Mayan calendar. B'ak'tuns are 144,000-day cycles and one of the units of time that the Maya used to keep track of the days since their mythological creation date. Thirteen of these b'ak'tuns would have been seen as one full cycle of creation.

However, there were no doomsday prophecies associated with this day. Only two carvings have been found that refer to the date; one brags that an ancient Maya king will still be praised that far into the future, while another refers to the return of a god associated with calendar changes. [End of the World? Top 10 Doomsday Fears]

Nevertheless, modern-day cultures have brought their own myths to bear on the Mayan calendar, leading to serious doomsday fears. NASA is receiving 200 to 300 calls and emails a day asking about the end of the world, a spokesman told the Los Angeles Times. The agency maintains a website debunking doomsday myths and is so confident that nothing will happen on Dec. 21 that it's already released a press release about the world not ending dated Dec. 22.

In Michigan, two counties have cancelled classes Thursday and Friday, citing both fears about school violence after the elementary school shooting in Connecticut last week and rumors about the end of the world causing distraction, according to CBS Detroit.

Finally, in China, splinter religious groups are warning of the apocalypse, earning government crackdowns in the country, which heavily controls religious freedom. In the northwestern province of Qinghai, the government has arrested more than 400 members of a group called the Church of the Almighty God, confiscating computers, banners, books, cellphones and other items, The Guardian reported.

Also in China, a farmer reportedly went into debt building several doomsday escape pods, steel-and-fiberglass structures meant to withstand an apocalypse. As of earlier this month, none of the $48,000 pods had sold.

Plenty of people scoff at Mayan apocalypse rumors, of course, but there is evidence that humanity is simply a superstitious bunch. The New York Post reports that Times Square celebration organizers are warding off the bad luck of a giant, lit-up "13" as part of the 2013 display by adding 13 "lucky charms," such as a four-leaf clover to the number.

"Some people get nervous about the number 13," Tim Tompkins, president of the Times Square Alliance, told the paper.