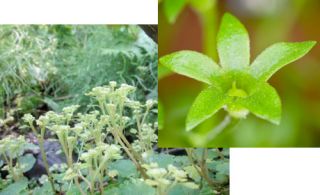 Splash-cup plants have conical flowers that capture raindrops and use the resulting splash to encapsulate and launch seeds. Scientists have just figured out their trick.
(Image: © Tim Nowack)

Splash-cup plants, which live everywhere from jungles to deserts, have conical flowers that catch raindrops and use the resulting splash to encapsulate and launch seeds.

For example, the "splash cups" of Chrysosplenium echinus can use rain to spread seeds more than 3 feet (1 meter) away, a distance equal to 10 times the plant's height. That would be comparable to raindrops getting deflected 50 to 60 feet (15 to 18 m) away after falling on the average person.

To learn more about how these splash cups accomplish this trick, researchers analyzed high-speed video of droplets falling on both real flowers and plastic copies of the flowers with varying shapes. They generated artificial rain using a syringe that dripped water drops 4 millimeters wide, about as big as large natural raindrops.

The researchers saw the splash cups redirect incoming raindrops at up to five times their incoming speed. This means droplets falling at terminal velocity — about 18 miles per hour (29 kilometers per hour) — could get launched at up to 90 mph (144 kph). [See Video of Splash-Cup Flowers in Action]

"This spout effect creates a jet of water that entrains the seeds and carries them away from the mother plant," researcher Guillermo Amador, a fluids researcher at the Georgia Institute of Technology in Atlanta, told LiveScience.

Past research suggests these plants evolved from species that originally used wind for seed dispersal, Amador said. They may have had to resort to a different strategy relying on raindrops, due to their short statures limiting the amount of wind they could catch and all the obstructions they might face close to the ground.

A better understanding of how droplets interact with surfaces could have applications in inkjet printing, industrial painting techniques, and even strategies to harvest energy from rain by converting its kinetic energy to electricity. This research could also shed light on blood splatters at crime scene investigations.

"By understanding the types of geometries that produce certain blood-splash patterns, a crime scene could be better understood," Amador said.

Amador, along with David Hu and their colleagues, detailed their findings online Dec. 12 in the Journal of the Royal Society Interface.