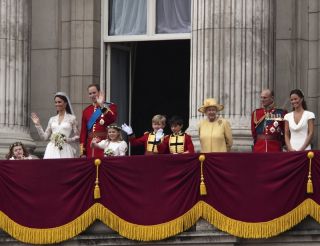 Catherine Middleton, the Duchess of Cambridge and wife of Great Britain's Prince William, is in the hospital for severe morning sickness, according to a statement by the palace.

The hospital admission serves as a pregnancy announcement for William and Kate, who married in 2011. The Duchess, who the palace says is in the very early stages of pregnancy, is experiencing a common — albeit in her case, severe — symptom.

Between 70 percent and 80 percent of pregnant women experience morning sickness, according to the American Pregnancy Association. The name is poorly chosen, as the nausea can come on at any time of day. It usually begins around the sixth week of pregnancy, as calculated from the woman's last menstrual period, and generally clears up by the end of the first trimester. [5 Myths About Women's Bodies]

Advice for managing regular morning sickness includes avoiding large meals, drinking and eating small amounts throughout the day, and avoiding cooking or other smelly activities that trigger nausea. The smell of lemon or ginger can sooth nausea, as can the taste of watermelon or salty chips, according to the American Pregnancy Association.

Kate's hospitalization suggests that her morning sickness is unusually severe, a condition known as hyperemesis gravidarum ("hyper" means excessive, "emesis" means vomiting, and "gravid" means pregnant). HG, as it is known, can prevent women from keeping down any food or water and can require intravenous fluid and nutrients. According to the What to Expect pregnancy guides, HG occurs in only about one in every 200 pregnant women.

While HG can make pregnancy seriously unpleasant, regular morning sickness is usually seen as a sign that everything is going well. Nausea and vomiting may be signs that hormone levels are rising normally, establishing the placenta, the organ that connects mother and fetus in the uterus. A 2008 study also found that morning sickness may protect embryos by prompting mothers to avoid nasty substances, including alcohol, cigarette smoke and strong-tasting foods. The study, published in the journal American Naturalist, noted that morning sickness tends to peak in the first trimester, when the embryo's developing organs are most susceptible to chemical disruption.