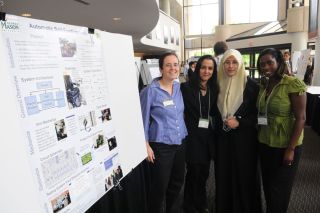 George Mason University undergraduate Salma Mahmoud is quick to point out that she isn't a mechanical engineer. In fact, all the students on her senior design project — Madani, Jane Kambugu, Sidra Khan and Kamran Mohammadi — are apt to mention their lack of mechanical engineering skills at some point. The fact that they are all electrical engineering majors steepened the learning curve for the bioengineering project they undertook, but made their success all the sweeter.

When the group came together in the fall, they had an interest in developing something that would help someone. Bioengineering was one of the concentrations available to them. It was Madani who suggested a device that could help her friend.

"He is in a wheelchair and can move his arms, but it takes a long time for him to complete the motions to eat a meal," says Madani. "We thought this device could help him enjoy a meal in the same amount of time it would take one of us to eat."

The time-saving and social benefits of such a device for a busy college student were clear to the group, so they decided to proceed. Senior design projects, requirements for engineering majors at universities across the country, require students to spend one semester doing research and planning, and the next semester building whatever it is they've committed to creating.

"It was really good that they had five people in this group," says the group's advisor, Nathalia Peixoto, a researcher and assistant professor in Mason's Volgenau School of Engineering.

Mahmoud and her team spent last fall researching what kinds of devices were already on the market and learning more about the mechanics of wheelchairs. Over time they came up with goals for their device: it had to be portable and discreet, it had to save time and minimize spills, it had to weigh less than five pounds, and it had to run on battery power using a rechargeable 6-volt battery.

They designed it — on paper — and came up with a budget. Mohammadi even built a version of the "arm" for the team's end-of-the-semester presentation, using a Lego® Mindstorms® kit. By December, they were ready to move on to the second phase, and with the construction of the device, the real work began.

"In the beginning, we had been working pretty linearly," says Mahmoud. "One week we would work on one motor, then move on to the next. Soon it became obvious that we would never finish."

So they divided up the tasks, trying to make sure everyone was working on something they were interested in. The project easily broke into five parts: the robotic arm, the mount that connects the device to the wheelchair, the printed circuit board, the sensor and programming.

For many of these tasks, the students had to start almost from scratch to learn what they had to do. "Everything was a learning experience for us," says Madani.

In terms of fabrication of the mount and circuit board, this included learning software with which they would design the piece before manufacturing. Khan oversaw the design of the mount. Madani worked on the circuit board.

"Three months," Madani says as she holds one of the small green circuit boards in the palm of her hand. That's how long it took to get the piece designed so it could go to the manufacturer. When the boards finally arrived, there was still soldering to do.

Were there hiccups in the process? You bet. For one, there was miscommunication between the team and the company selling them a tiny camera that was to be the device's "eyes" and help the spoon find food. Just three weeks from their deadline, they had to come up with a better plan.

"I knew nothing about sensors, except that we needed one," says Kambugu, who oversaw that portion of the project. "So I did a ton of research to figure out what kind of sensor would work best for us. Then it needed to be calibrated for this use."

How much help was their mentor Peixoto? "A lot," says Mahmoud with emphasis. "In the beginning, we got stuck on something I now realize is very basic, but we had spent a week trying to work out a solution."

A simple suggestion from Peixoto got them past that first hurdle, and she has been guiding them throughout the process.

"I know they pulled many all-nighters," says Peixoto. "I got several e-mails from them that were written at odd hours of the night saying 'We need this …'"

Because of the nature of the group's project, Peixoto was also able to provide financial assistance. Peixoto and Vasiliki Ikonomidou, an associate professor also in the Department of Electrical and Computer Engineering at Mason, are co-principal investigators on a National Science Foundation grant specifically designed for this purpose — part of a legacy of support for similar research. They asked NSF for $100,000 to support senior design groups who are developing projects to help other students. Their current plan is to fund one group per semester with the grant, which runs until 2016.

Over the course of the spring semester, the automatic arm in its various iterations served up Legos®, Cheerios® and other small items. It wasn't until April that the group had the arm's intended owner come in to test it with real food. The test was a great success, and the team could finally breathe a little easier.

It was always their intention that the completed device would go to the student for whom they had developed it. What they didn't anticipate was that it might have a life beyond the prototype.

Peixoto says that she and the group have been in communication with a local assistive technology company that designs custom wheelchairs. The company is interested in possibly offering the automatic arm as a feature.

But for now the students are mostly relieved to be done with classes. Some team members graduated in May 2012 and moved on to graduate studies or finding work; others still have classes to take.

"The work of engineers can change lives, especially in areas such as assistive technology," Peixoto says. "When you can see how others benefit from something you've created, that has a huge impact on you. These undergraduates got that."