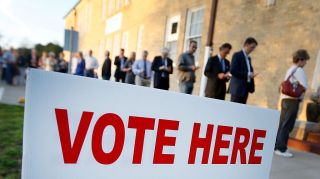 Voters line up to cast their ballots on Super Tuesday March 1, 2016 in Fort Worth, Texas.
(Image: © Ron Jenkins/Getty Images)

On Tuesday (Nov. 8), the 2016 presidential election votes will be tallied and the winner announced — barring any vote count snafus or an Electoral College tie.

As the election of 2000 proved, the Electoral College can make all the difference in the outcome of a presidential race. So how does it work?

When you cast your vote for Hillary Clinton or Donald Trump, you're not actually picking one man or the other. You're voting for his electors, a group of people (usually selected by the political parties) who, in turn, cast their votes for their candidates. Each state gets one elector for each of its representatives in the House of Representatives, plus two for its Senators.

Because House representation is based on population, so is the Electoral College. With 55 electoral votes, California has the most of any state. The least-populated states, including Wyoming, Alaska and the Dakotas, get three electors each, as does the District of Columbia.

That makes for a total of 538 electors in the Electoral College. Candidates need 270 votes to win the presidency.

The history of the Electoral College

In perhaps the most unusual electoral vote incident, John Quincy Adams lost both the popular vote and the electoral vote in 1824, yet still managed to become president. Neither Adams nor his opponent, Andrew Jackson, got a majority of electoral votes — at that time, 131. So the decision went to the House of Representatives, who awarded the race to Adams. Adams quickly made the Speaker of the House, Henry Clay, his Secretary of State, prompting Jackson to accuse the two of a "corrupt bargain."

Because of the largely "winner-takes-all" electoral system, candidates focus their energies on states that are likely to go either way — swing states. You won't see many campaign stops in reliably Republican Texas in the last hours of the campaign, for example, but swing state Colorado could be crawling with candidates.

Several political analysts have said that while Clinton has several pathways in the Electoral College map to the White House, Trump has just one, and in this winning scenario North Carolina is key. "If Secretary Clinton wins North Carolina, there really is no path for Donald Trump to win the presidency," said Scott Falmlen, the former executive director of the North Carolina Democratic Party, as reported by Politico.

On Monday (Nov. 7), in addition to North Carolina, Clinton visited three other important states: Pennsylvania, Michigan and Pennsylvania, according to ABC News.

According to Politico, this year's swing states are: Colorado, Florida, Iowa, Michigan, Nevada, New Hampshire, North Carolina, Ohio, Pennsylvania, Virginia and Wisconsin. That's a lot of electoral votes that could swing one way or another.