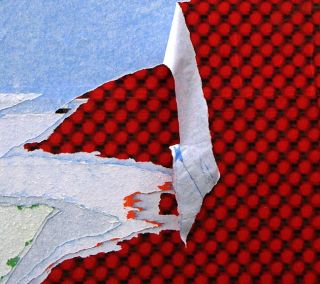 Scientists have discovered the physical formula for why wall paper is so difficult to remove - and there may be nothing you can do about it.
(Image: © stock.xchng)

You grip. You tug. It rips. Will that blasted piece of wallpaper ever come off cleanly?

New research shows the do-it-yourself crowd may just be out of luck when it comes to removing any sticky sheet such as tape or wallpaper. In fact, pulling evenly on an adhesive film pretty much guarantees it will end, frustratingly, in a triangular point, scientists say.

"There's basically no way to get around it," Pedro Reis, an applied mathematician at MIT, told LiveScience. "These are the cards the laws of physics have dealt us."

Reis and his colleagues in France and Chile detail their work on the tricky, sticky phenomenon in the March 30 advance online issue of the journal Nature Materials.

When a strip of something sticky is yanked, Reis said, the force not only works to break the adhesive's grip, but also deforms two folds from which the piece originates. Somehow, that deformity always causes the strip to narrow into a point.

"The geometry of how the folds deform is extremely important," Reis said. "If you get rid of the adhesive properties of a film, though, then our theory doesn't apply."

The strength of an adhesive, the thickness of the sheet and the force it's being pulled at, he said, are key to determining just how quickly an attempt at redecorating will devolve into a frustrating triangular tip.

A robotic film-pulling experiment the team designed showed that slower pulling lowers the adhesive's strength, reduces the deformation at the strip's folds, and ultimately yields a longer yet still triangle-tipped strip.

Reis expects his research to extend into the field of bendable electronics.

"This is helpful information in designing anything that has adhesive properties," Reis said of the research. "If you're making stretchable electronic circuits, you're depositing metals onto a thin polymer sheet. You want to know the limits of the material you're depositing on, and this could help."

Wallpaper manufacturers could also learn a lesson or two, he added.

"With duct tape, it has a mesh in it to prevent the deformation, so you always get a perfect rectangular strip," he said. "Maybe they should put a mesh in wallpaper from now on."