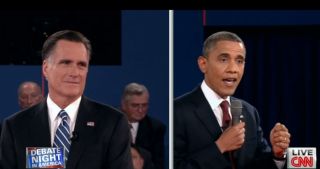 Though Pres. Obama and Gov. Romney both controlled their body language, they did show primate-like behavior, such as broadsiding in which they would square the chest toward the opponent, one expert says.
(Image: © Video Screengrab/CNN)

The more open, town-hall format of the second Presidential debate on Tuesday (Oct. 16) allowed the candidates to stand up to confront one another and the moderator, something not possible during the first debate earlier this month.

But in spite of some aggressive cues and a more heated performance by President Barack Obama, both men portrayed few nonverbal cues to their emotions, said David Givens, director of the private, nonprofit Center for Nonverbal Studies in Spokane, Wash.

"It's almost as if they had learned to control their body movements and facial expressions and what not from [news] coverage that has been out there," Givens said. "Both did a very good job on that, on masking their feelings."

He noted that Obama did on a few occasions smile, which in this context could be a sign of condescension, that Obama thought something Romney said was ridiculous. Romney swallowed visibly, a sign of embarrassment, emotional anxiety or stress. Unlike Obama's, Romney's smile appeared scripted, like something he had learned to do, rather than a heartfelt impression, Givens said.

In the first presidential debate, the two candidates squared off from behind podiums. In Tuesday's debate, they had handheld microphones and could approach the audience, the moderator and each other when responding to a question.

When heated disagreements arose, one candidate would rise from his tall chair and approach his opponent or the moderator Candy Crowley.

"The only nonverbal thing I saw they didn't control was standing up," Givens said.

When one candidate became upset and rose, he would square his chest toward his opponent or moderator, "a very primate type thing," Given said. This is a display of dominance known as a broadside display, intended to exaggerate one's body size, according to Givens' "The Nonverbal Dictionary" (Center for Nonverbal Studies Press, 2012).

Full suits, which both candidates were wearing, are designed to amplify cues from a broadside display. For instance, a suit coat exaggerates the size of the upper body, with flaring lapels that create an illusion of pectoral strength, and a tie that covers up a vulnerable part of the neck. Dark colors are more dominant than lighter ones, Givens said. Both candidates wore black suit coats and pants. [Quiz: Bizarre U.S. Presidential Elections]

During the first debate, Romney's aggressive performance was widely seen as the more successful. This time, Obama turned up the heat, appearing more engaged and aggressive than before. However, Givens said, "He is still very cerebral, thoughtful, whereas Romney is more of a brawler."

Obama appears to think before he speaks, while Romney's responses seem more scripted, he said.

The third and final debate is scheduled for Monday, Oct. 22.