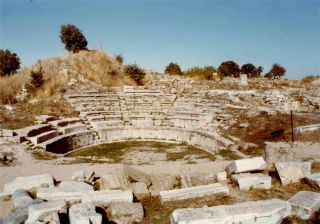 An amphitheater of Troy, the ancient city where archaeologists plan to dig beginning the summer of 2013.
(Image: © Brian Harrington Spier, Creative Commons.)

Armed with shovels, trowels and new biotechnology tools, archaeologists plan to march into Troy next year for excavations at the famed ancient city.

"Our goal is to add a new layer of information to what we already know about Troy," said William Aylward, a classics professor at the University of Wisconsin-Madison, who will lead the expedition. "The archaeological record is rich. If we take a closer look with new scientific tools for study of ancient biological and cultural environments, there is much to be found for telling the story of this World Heritage site."

The city immortalized in Homer's "Iliad" lies in what is today western Turkey and was rediscovered in the 1870s by German archaeology pioneer Heinrich Schliemann. Since then, researchers have been digging up the site periodically, but less than one-fifth of Troy has been excavated.

"Our plan is to extend work to unexplored areas of the site and to systematically employ new technologies to extract even more information about the people who lived here thousands of years ago," Aylward said in a statement announcing the project.

Troy was occupied as far back as the beginning of the Bronze Age, and Aylward said there are "major gaps" in our knowledge of prehistoric Trojans, which he hopes to help fill.

The expedition plans to use new methods of chemical analysis to examine residues on pottery, which might provide hints about what Trojans were eating in their banquet halls. Furthermore, genomic analyses of human and animal remains could reveal information about of ancient eras.

The series of summer dig seasons, beginning in 2013, will be conducted with the support of Turkey's Çanakkale Onsekiz Mart University.