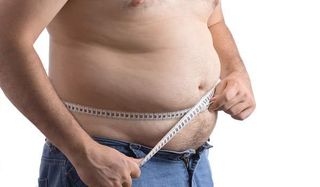 Consumer worries over gas prices and new fuel-efficiency regulations are causing automakers to get serious about trimming fat from their cars, with some even swapping out hard-copy owner's manuals for flash drives in the push to cut weight. But an insurance company has compiled data suggesting that car companies' efforts are being stymied by increasing loads on one key area: the driver's seat.

According to an infographic created by the insurer Allstate and Cars.com to explain the relation between fuel economy and obesity, "the growing trend of American obesity adds unexpected weight to vehicles, making it difficult for consumers to realize fuel efficiency gains." Indeed, studies suggest that America's obesity epidemic is having a significant impact on gas consumption and fuel economy in more ways than one.

Allstate based its infographic in part on a 2006 study published in the journal The Engineering Economist. By comparing national weight statistics from the early '60s and the period 1999-2002, the study determined that cars and trucks were consuming 938 million additional gallons of fuel annually transporting the extra weight Americans had put on, on average, since 1962. [Infographic: American Obesity Rate Continues to Rise]

Sheldon Jacobson, a co-author of the study and a professor of computer science at the University of Illinois, updated the report in 2008. Due to continued weight gains, the number jumped to 1.137 billion gallons, representing 0.8 percent, or about three days' worth, of America's yearly fuel consumption.

But America's excess poundage may swell fuel consumption in other, subtler ways.

A 2009 study by Resources for the Future, a nonprofit organization that conducts research on environmental issues, investigated whether there's any truth to the notion that larger people tend to buy larger vehicles, ostensibly for reasons of comfort. It found that, between 1999 and 2005, a 10 percent increase in the rate of overweight and obese people corresponded with a 2.5 percent decrease in the miles per gallon of new vehicles that were purchased.

Jacobson says the collective weight gains that now hinder automakers' bids for fuel efficiency might be rooted in automobile use in the first place. He co-authored a study in 2011 that found a very close correlation between national figures for miles traveled per licensed driver and adult obesity rates six years down the road.

"We've built a nation around forcing people to drive," Jacobson told Life's Little Mysteries. "The question is, if we structure our lifestyle around the automobile, will that exacerbate the obesity problem in the nation, and evidence suggests that there may be a relationship."