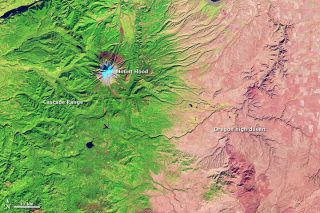 Within a short distance in Oregon, you can visit the high desert, a mountaintop glacier, a temperate rainforest and a beach. The wide variety of ecosystems in the area is largely due to the effect of the Cascade Mountains on air blown eastward off the Pacific Ocean.

Air cools as it rises up the mountains, reducing air pressure and causing water to condense and fall out as rain. That's why the westward side of the Cascades is often covered in clouds and receives a lot of rain, which allows for vast temperate forests to thrive. By the time the air reaches the other side of the mountains, though, it descends and warms. This effectively shuts off the rain because the air can better hold the remaining moisture.

The result of this "rain shadow" can be seen in this image taken by the Landsat 5 satellite on Oct. 27, 2011. In this false-color view, bare soil and sparse vegetation appear as brown and pink, while forests appear as green. The one blue spot is the glacial cap of Mount Hood.

Oregon's forests are home to a wide variety of animals, likely including the Sierra Nevada red fox, a subspecies that's one of the rarest mammals in North America. Torrential rains have also helped carve a large number of caves, which remain mostly unexplored. In one of these caves, however, intrepid explorers discovered a whole new family of spiders hanging from the ceiling.