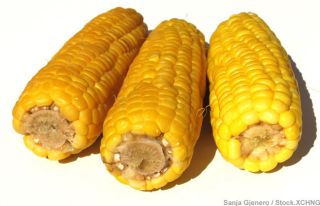 Opponents of genetically modified crops have jumped on the results of a new study, which claims to have linked the consumption of GM maize with the development of tumors in rats -- despite widespread criticism of the research from independent scientists around the world.

Far below the horrifying pictures of mice with enormous tumors, some of the most frightening articles embed caveats. But, experts say, the criticisms should trump the results of the study, which used questionable methods, tumor-prone rats, and poor statistical techniques.

The research also came out of a French research lab, whose anti-GM studies have been harshly criticized in the past.

PHOTOS: Facts and Fables About Eco-Labels

"There is very little scientific credibility to this paper," said Martina Newell-McGloughlin, a plant biotechnologist at the University of California, Davis. "The flaws in the test are just incredible to me. To be totally honest with you, the type of statistical analysis they used is really a type of fishing expedition. One individual referred to it as ‘fantasy statistics.'"

"You never, ever design an experiment to look for specific outcomes," she added. "If you're a real scientist, based on observations you find, you put forward hypotheses about how you are getting these types of outcomes. They do none of this."

The study, which is written in stilted English with long, convoluted sentences and highly technical language, reported the results of an experiment that fed maize to about 200 rats over a two-year period.

The study authors did not respond to requests by Discovery News for comment. But a New York Times article quoted lead researcher Gilles-Eric Séralini, of the University of Caen in France, as saying, "The results were really alarming."

Criticisms began to roll in immediately.

One immediate problem, Newell-McGloughlin said, is that the line of rodents used in the study, known as Sprague-Dawley rats, are frequently used in cancer research because a large majority of them naturally develop tumors at a high rate, regardless of what they eat or how they're raised.

What's more, the rats were allowed to eat an unlimited amount of food, which increases their chances of developing tumors. And two is a very old age for these rats, which could account for the large rate of cancer seen across all groups, including the controls.

The small size of the control group also raised red flags. Even experienced scientists in the field had trouble interpreting data in the study, as seen in comments collected by the UK's Science Media Center, but it appears that the study included just 10 or 20 control animals.

That means there were at least nine times more test animals than control animals. If anything, studies of this kind usually include two or three times more controls than experimental animals.

The results don't make a lot of sense, either. No matter how much of either herbicide-laden or genetically modified maize the rats ate in proportion to their other food, rates of cancer and premature death remained the same. However, to be meaningful, toxicology studies like this should show a dose-dependent response, which means that if something is toxic, more of it should be more toxic.

Looking at the data, it appears that the study authors never tested their results to see if the numbers they turned up could have occurred by random chance, said David Tribe, a microbiologist at the University of Melbourne in Australia. And given the small numbers of animals used in the study, that's a real possibility.

"The central issue in this study has to do with random effects, and it turns out these rats are not all that well suited to an investigation of this length of time," Tribe said. "Just because they are getting tumors doesn't mean that the food is causing it or that the herbicide is causing it. It could be that the difference between groups is just a result of random events leading to tumors."

Séralini has been criticized in the past for lack of scientific merit in previous research that also came out against GM crops. In 2007, the European Food Safety Authority offered a sharply worded response to one of Séralini's earlier studies.

Many tens of millions of people and animals have consumed substantial quantities of genetically modified soybeans, maize and other crops around the world over the last 15 years, Newell-McGloughiln said. Yet, there has been no evidence of a rise in related health outcomes. Nor have many other scientific studies turned up any concerns about the health effects of GM crops.

Despite the large number of severe criticisms that have been launched at the new study, it is likely to cause lasting damage to the reputation of GM foods, especially among people who read only headlines.

"Unfortunately, the visual of these rats and the pervasiveness of the stories will most probably have a negative effect, especially since they are spreading through the net without context or fact-filters," Newell-McGloughlin said. "You can only hope that people will take the time to check out the facts behind the images. However, for many, a picture paints a thousand words, and that is as deep as they will go."