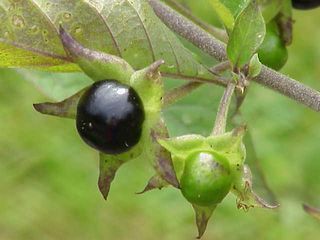 The berries of the Deadly Nightshade plant, seen here, are thought to explain the behavior of a German monk who was found stumbling naked through a forest.
(Image: © Public domain (Kurt Stüber))

Hallucinogenic berries, not religious experience, likely caused the strange behavior of a scraped-up monk who was discovered stumbling naked through a German forest last Thursday (Sept. 6), according to NBC.

A concerned hiker who spotted the naked man and tried unsuccessfully to assist him notified police in the Bavarian town of Unterwössen, according to news reports. Police found the man cold and disoriented and took him to the hospital.

Apparently the monk, who is from a town nearby Unterwössen, had eaten poisonous berries while camping. The berries reportedly gave him hallucinations and partial paralysis, preventing him from finding his way back to his tent.

According to NBC, "It wasn't clear why he wound up naked."

But, given the type of berry he likely ate, it may not be such a mystery. The hospital determined the ingested berries probably came from the Deadly Nightshade plant, according to a German police report.

The hallucinogenic and muscle-impairing effects of Deadly Nightshade, a common name for the herbaceous Atropa belladonna plant, are due to the chemicals atropine, scopolamine and hyoscyamine.

These chemicals disrupt the activities of the parasympathetic nervous system, which regulates involuntary activities such as digestion, heart rate and salivation. In low doses, they have pharmaceutical uses in treating stomach spasms and motion sickness, and in keeping the heartbeat normal during surgery, according to the Mayo Clinic.

But as can be guessed from the plant's name, in the large doses present in Deadly Nightshade and its berries, the chemicals' effects on the nervous system can be lethal.  Symptoms of an overdose of these chemicals include confusion or unusual behavior, fast or irregular heartbeat, flushing of the face, and hallucinations, according to the Mayo Clinic. Another potential side effect is fever, which may partially explain the monk's decision to disrobe.

In the United States, Atropa belladonna grows in California, the Pacific Northwest, Michigan, New York and New Jersey, according to the U.S. Department of Agriculture. But a far more common sight for hikers in North America is a close relative of Deadly Nightshade called Datura stramonium, or Jimsonweed, which is toxic for all the same reasons but does not have berries.