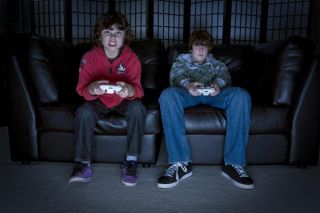 Teens who play video games that glorify reckless driving may bring some of their virtual dangerous habits to road, a new study shows.

Researchers surveyed more than 5,000 U.S. teenagers over four years in four waves of telephone interviews that occurred when the teens were, on average, between the ages of 14 and 18. Half of the teens reported in the first interview that they were allowed to play mature-rated games — among them, Grand Theft Auto III (58 percent), Spiderman II (32 percent) and Manhunt (12 percent).

By the third interview, when most teens were 16, a quarter of them answered "yes" when asked if they engaged in any unsafe driving habits, the researchers said. By the final interview, 90 percent said they engaged in at least one unsafe driving habit, including speeding (78 percent), tailgating (26 percent), weaving in and out of traffic (26 percent), and running red lights (20 percent).

The study found that playing mature-rated, risk-glorifying games was associated with an increase in self-reported risky driving, as well as sensation seeking and rebelliousness — qualities measured by the teens' rating of themselves with regard to such statements as "I like to do dangerous things" and "I get in trouble at school." And higher rankings in thrill seeking and rebelliousness were directly linked to risky driving habits, car accidents and being stopped by police, according to a statement from the American Psychological Association (APA), which published the study in its journal Psychology of Popular Media Culture. [Teens and Video Games: How Much Is Too Much?]

"Playing these kinds of video games could also result in these adolescents developing personalities that reflect the risk-taking, rebellious characters they enact in the games and that could have broader consequences that apply to other risky behaviors such as drinking and smoking," Jay G. Hull, a Dartmouth College researcher who led the study, said in an APA statement.

The study builds on previous research that found similar results. It controlled for gender, age, race, parent income, education and parenting styles described as warm and responsive or demanding, according to the APA. The number of participants completing the questions for the study dropped with each phase and dipped under 3,000 by the last set of interviews.