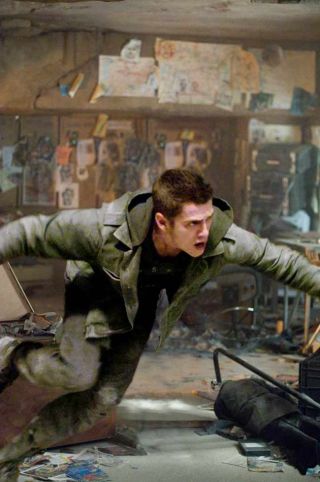 The movie "Jumper," opening today, has a hero with the extraordinary power to teleport anywhere on Earth by imagining the place he wants to go.

As fantastic as teleportation seems, it can actually happen in the real world.

"The fact is that physicists have teleported things over miles," said Edward Farhi, the director of MIT's Center for Theoretical Physics. "It doesn't violate the laws of physics."

There's a huge — or rather, very tiny — caveat, however. For now, it only works with a single photon.

When scientists talk about teleportation, they don't typically mean teleporting matter from one place to another as in the new movie. Rather, teleportation involves capturing the essential information about something — its "quantum state" — to recreate it exactly someplace else.

Teleporting, say, an electron would first involve "entangling" a pair of electrons. After the particles are made to interact a certain manner, whatever one does influences the other, regardless of the distance between them — a bit of quantum physics that Einstein called "spooky action at a distance."

Next, one electron — the one you want teleported — would stay wherever you like while you would physically bring the other electron to whatever destination you wish.

Then you have to measure the quantum state of the electron you want teleported and send that in a signal to your destination, where it can be used on the other electron to recreate the first one. Voila — quantum teleportation.

So far scientists have teleported single photons — a packet of light — across miles. But that's "a far cry from teleporting a person," Farhi said.

To begin with, measuring the quantum state of an object essentially destroys it. Ouch.

Next, your average person is made of more than 10^27 atoms — a 1 with 27 zeroes behind it — and each atom is made of subatomic particles such as protons, neutrons and electrons. Measuring the quantum states of all of a person's particles would likely take a long, long time.

It's not clear how you would entangle all of a person's atoms with the mass of particles you want to bring to a destination. Also, teleporting an object composed of many parts that all interact with each other, such as a person, would be far more complex than teleporting an isolated photon.

"It looks easier just to send whatever object you want to teleport" via conventional means, Farhi said.

In "Jumper," a person teleports by essentially opening a rift in the fabric of reality. In reality, passages across space and time — dubbed wormholes — could theoretically exist, and going into one mouth of a wormhole could spit you out another instantaneously.

It's not as easy as it sounds, though.

"Wormholes seem to be unstable. If you try to travel through one, it would collapse into a black hole, which kind of sucks," said MIT physicist Max Tegmark.

It might be possible, however, to stabilize wormholes with dark energy, the enigmatic force driving the accelerating expansion of the universe. Of course, since dark energy is a mystery, it remains unknown whether there is any way to actually use it.

In addition, "the entrance to a wormhole looks a little bit like a black hole," Tegmark said. In other words, there are gravitational forces at hand that can easily tear anything near it apart. That means if you wished to survive crossing into a wormhole, you would need a very large wormhole, so any forces acting on you would even out across your body. If not, your toes might get tugged on more strongly than your head, for instance, stretching you into a noodle — a process that scientists call "spaghettification."

Even if the wormhole had the mass of the sun, it would only be about two miles wide, "and that would still kill you," Tegmark said. "You would need something like the monster black hole at the center of our galaxy," he explained, which is roughly 2.6 million times the mass of the sun.

And if you succeed in creating a wormhole? You still need to drag each of its "mouths" or openings to where you want to start and stop. Only after you do that can you rapidly go back and forth.

Tegmark said he does hope "Jumper" gets people "more psyched about science. I think a lot of scientists today went into science after they got fired up by science fiction. It's good for scientists to watch sci-fi, as it forces you to ask deep questions about the nature of reality. You don't want to just find the right answers, but to ask the right questions too, and sci-fi can trigger great questions."