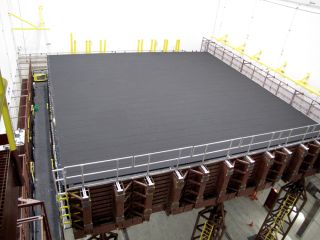 Physicists have put the first piece in place for a new detector to study the strange properties of particles called neutrinos.

Neutrinos are all around us, but they rarely collide with other particles, and mostly fly through people, buildings, and the planet Earth as if they weren't there. These charge-less, nearly mass-less subatomic particles come in three flavors, and can switch between them, changing their identities over and over. Their bizarre properties may help explain some fundamental mysteries of the universe, such as why it's full of matter and not antimatter.

To study neutrinos, scientists must find them first. Toward this end, a new experiment is under construction called NOvA (NuMI Off-Axis Neutrino Appearance). The project involves two facilities — one in Ash River, Minn., and the other at the Fermi National Accelerator Laboratory near Chicago — that will send neutrinos back and forth.

Neutrinos will easily pass through the 500 miles (800 kilometers) of earth separating the two bases in less than three milliseconds. Once the neutrinos arrive, physicists are hoping they'll crash into some of the atoms in specially designed detectors filled with a liquid scintillator material. When they do, the bang-up will give off light in the form of photons that can be measured, proving a record of each neutrino encounter. [Strange Quarks and Muons: Nature's Tiniest Particles Dissected (Infographic)]

Today (Sept. 6), technicians began to position the first block of this detector at the Ash River site.

"This is a significant step toward a greater understanding of neutrinos," Marvin Marshak, NOvA laboratory director and director of undergraduate research at the University of Minnesota, said in a statement. "It represents many months of hard work on the part of the whole NOvA collaboration."

The blocks will be empty when installed, and filled with their scintillator liquid once in place.

"About a dozen scientists, engineers and technicians from Fermilab and Argonne have been up to Ash River multiple times in the past year to make this thing happen," said Rick Tesarek, Fermilab physicist and NOvA deputy project leader. "They're part of a team of over a hundred collaborators who have been actively working on the experiment."

Once NOvA is up and running, it will be the most advanced neutrino experiment in North America, scientists say. It is scheduled to begin taking data in 2013.

The machine will focus on unraveling the puzzle of neutrino flavors. Neutrinos come in three types — electron, muon and tau — which are each associated with the elementary particles bearing those names. Neutrinos transform between these flavors at different rates, and the antimatter partner particles of each of these neutrinos change flavors at different rates still.

But to puzzle this out, scientists need more measurements to pin down the frequency of such transformations.

"Everyone's been watching to see which experiment will make the next big step in uncovering the properties of neutrinos," said Mark Messier, Indiana University physicist and co-spokesperson of the NOvA experiment. "The NOvA experiment should be it. It is uniquely positioned to be the first experiment to determine the ordering of the masses of the three neutrinos."