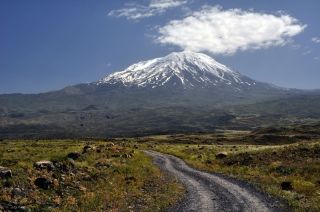 "Baywatch" star Donna D'Errico was recently injured on a mountain in Turkey while on a quest to find Noah's Ark. The former model and actress was on Mount Ararat with a documentary film crew when she slipped in a rockslide; a colleague caught her before she fell off a cliff.

Climbing any mountain can be dangerous, and Ararat is no exception: In addition to the dangers associated with altitude sickness, rock slides, and capricious weather, D'Errico and her team faced the possibility of abduction, since previous climbers have claimed such. After she fell and injured herself, she posted photos of her cuts and bruises online. Ironically the attention that her photos received doomed the project because her presence there and status as a celebrity increased her chances of being kidnapped for ransom. "If they [potential kidnappers] found out that there's someone, even of minor notoriety on the mountain, it could put the whole group in serious danger," D'Errico said.

Why would a Hollywood beauty risk life and limb (not to mention some likely teasing) in search of what many people believe to be a myth? D'Errico said that she was inspired to search for Noah's Ark ever since she was a child after seeing a movie about it. D'Errico told ABC News, "I know what I'm doing and I know that this is my lifelong dream and I believe in the Bible," she said—referring to Genesis 8:4, which states "on the seventeenth day of the seventh month the ark came to rest on the mountains of Ararat."

Searching for the Ark

D'Errico may be the most recent (and perhaps the highest-profile) searcher, but in fact, Noah's Ark has been "found" many times. Nearly 40 years ago, Violet M. Cummings, author of "Noah's Ark: Fable or Fact?" (Creation-Science Research Center, 1973) claimed — without evidence — that Noah's Ark had been found on Mount Ararat. According to her book and film "In Search of Noah's Ark," (Scholastic Book Services), "there is now actual photographic evidence that Noah's Ark really does exist. ... Scientists have used satellites, computers, and powerful cameras to pinpoint the Ark's exact location on Mt. Ararat." Nearly 40 years later, that evidence remains elusive. [Religious Mysteries: 8 Alleged Relics of Jesus]

In February 1993 CBS aired a two-hour primetime special titled, "The Incredible Discovery of Noah's Ark." It included the riveting testimony of a George Jammal, who claimed not only to have personally seen the Ark on Ararat but to have recovered a piece of it. Unfortunately for believers, it was all a hoax. Jammal was later revealed as a paid actor who had never even been to Turkey and whose piece of the Ark was not an unknown ancient timber but instead modern pine soaked in soy sauce.

In March 2006, a team of researchers found a rock formation on Ararat that might resemble a huge ark, nearly covered in glacial ice. A few months later a team of archaeologists from a Christian organization found yet another rock formation that might be Noah's Ark — this time at 13,000 feet (3,962 meters) in the Elburz Mountains of Iran.

Like those before her, D'Errico insists that her quest is based in science as much as personal faith. True believers have long used science and powerful technology in their search for Noah's Ark, including satellite imaging and powerful cameras. She was quoted in The Daily Mail as saying that she had studied the reports of Noah's Ark extensively, and she "knows where the sightings have been. According to my research, the ark lays broken into at least two, but most likely three, pieces."

The Ark story is scientifically implausible; there simply wouldn't be enough space on the boat to accommodate two of every living animal (including dinosaurs), along with the food and water necessary to keep them alive. Still, biblical literalists — those who believe that proof of the Bible's events remains to be found — have spent lives and fortunes trying to validate their beliefs.

D'Errico reluctantly abandoned her dream of searching for Noah's Ark and returned to Los Angeles — for now. She said she plans to return to Ararat as soon as possible to complete her mission.