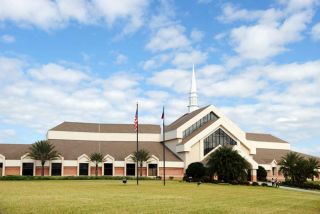 DENVER — More and more Americans are spending their Sundays at megachurches, enormous churches with congregations numbering in the thousands. Despite the size of these churches, members don't get lost in the crowd, new research finds.

In fact, a new study of 12 representative megachurches spread across the country finds that the size of these churches is a major part of their appeal. Members report that the experience of worshiping with thousands is intoxicating, the researchers find.

"It's an addicting experience, it's so large, it's so huge," said study researcher Katie Corcoran, a graduate student in sociology at the University of Washington. "One respondent said you can look up to the balcony and see the Holy Spirit go over the crowd like a wave in a football game."

Worshiping in a crowd

Prior research had suggested that megachurches were rather soulless — entertaining, but lacking a sense of spirituality or belonging, Corcoran told LiveScience.

"We went in thinking that’s what we were going to find," she said. "Instead, we actually found the opposite, that people do experience strong feelings of belonging. They're very happy with their megachurch, and the size is actually seen as a positive rather than a negative." [8 Ways Religion Impacts Your Life]

Interviews with 470 megachurch members revealed a repeated theme of belonging, with congregants emphasizing how welcoming and "unpretentious" the churches are.

Megachurches are defined as having a weekly attendance of 2,000 or more people. Recent polls suggest that Americans have less faith in religion than any time in the last three decades, but megachurches are on the rise. In 1990, only 350 churches in the United States qualified as megachurches. Today, there are more than 1,200.

The rise of megachurches

Corcoran attributes the rise in megachurches to charismatic pastors, optimistic messages and activities for every interest. Small groups, often based around non-religious hobbies like knitting or fishing, give members a sense of belonging, she said.

"The main reason that people are gravitating towards these churches is because they do offer a wide variety of programs, and they have very enjoyable and entertaining services with messages that a lot of people feel comfortable with," Corcoran said.

The researchers also found a new trend of people reporting that they regularly attend not only a megachurch, but another church as well. It's not yet clear why people double up on their churches, but it's likely that they're getting something different from each church, Corcoran said.

Corcoran will present her findings today (Aug. 19) here at the annual meeting of the American Sociological Association. The researchers, led by University of Washington religion professor James Wellman, are working on a book about their findings called "High on God: How the Megachurch Conquered America," due out in 2013.