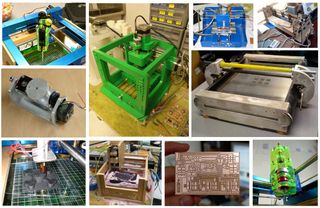 An array of additive manufacturing devices at MIT. The U.S. hopes such technology can give a boost to its manufacturing sector.
(Image: © 2010, Courtesy of Neil Gershenfeld, Center for Bits & Atoms, MIT)

Laser-armed 3D printers could exorcise the ghosts of shuttered steel mills for U.S. manufacturing. President Barack Obama has awarded $30 million to establish the first national 3D printing institute in an Ohio town at the heart of the so-called "Rust Belt" region of the Midwest.

The National Additive Manufacturing Innovation Institute — a public-private partnership headed by the U.S. military — wants to harness the power of 3D printing to transform almost any digital blueprint into a physical object. Such technology could not only speed up and cut the costs of manufacturing robots or military weapons, but could also create human organs, bones or body parts tailored for specific patients.

"I'm pleased that we are taking steps to strengthen American manufacturing by launching a new manufacturing institute in Ohio," said Obama in a statement. "This institute will help make sure that the manufacturing jobs of tomorrow take root not in places like China or India, but right here in the United States of America."

The town of Youngstown, Ohio, won the $30 million in federal funding through a competitive selection process. Its pilot institute for 3D printing will also receive an additional $40 million from the winning consortium of manufacturing firms, universities, community colleges, and nonprofit organizations based in the "Tech Belt" across Ohio, Pennsylvania and West Virginia.

Researchers have already used 3D printers to make everything from spider robots to artificial blood vessels, as well as a tailor-made jawbone surgically implanted in an elderly woman. A gun enthusiast has even used a 3D-printed gun part in a pistol. [3D Printer Helps Make Working Gun]

U.S. manufacturing has already experienced startling growth since the loss of many jobs before and during the recent economic recession. The U.S. economy has added more than 530,000 manufacturing jobs since February 2010, as rising business costs in countries such as China have led many U.S. companies to return home.

The speed and flexibility of 3D printing promises to give U.S. manufacturers the capability to quickly print out even the rarest parts of an old machine, or customize parts to fit the needs of a certain customer. That means the U.S. military could someday print on-demand replacement weapons or machines for the battlefield, even as DIY tinkerers create and innovate upon designs in their own homes.

But as cool as 3D printing looks, another fast-expanding technology could have an even bigger impact on manufacturing worldwide — the rise of the robots.