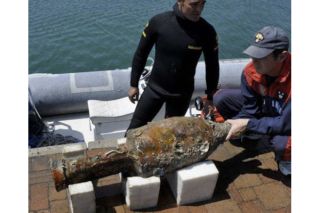 A jar is recovered from the ancient Roman ship
(Image: © Centro Carabinieri Subacquei.)

An almost intact Roman ship has been found in the sea off the town on Varazze, some 18 miles from Genova, Italy.

The ship, a navis oneraria, or merchant vessel, was located at a depth of about 200 feet thanks to a remotely operated vehicle (ROV) following tips from fishermen who had caught some jars in their nets.

The ship sank about 2,000 years ago on her trade route between Spain and central Italy with a full cargo of more than 200 amphorae.

Test on some of the recovered jars revealed they contained pickled fish, grain, wine and oil. The foodstuffs were traded in Spain for other goods.

"There are some broken jars around the wreck, but we believe that most of the amphorae inside the ship are still sealed and food filled," Lt. Col. Francesco Schilardi, who led the Carabinieri Subacquei (police divers), said.

The ship, which dates to sometime between the 1st Century B.C. and the 1st Century A.D., is hidden under layers of mud on the seabed, which has left the wreck and its cargo intact.

The vessel will remain hidden at the bottom of the sea until Italian authorities decide whether to raise it or not.

"Right now the area of the finding has been secured, and no fishing or water traffic is allowed," Lt. Col. Schilardi said.