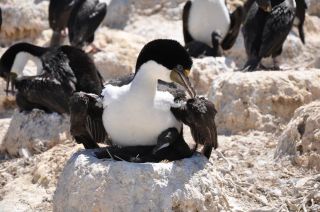 A camera attached to a South American seabird allowed scientists to directly watch its deep-diving feeding techniques for the first time.

Researchers from the Wildlife Conservation Society fitted a small camera to the back of an imperial cormorant in Punta León, a coastal protected area in Argentine Patagonia.

The WCS video footage shows the bird diving underwater with its head bobbing as it pumps its wings to swim deeper. It reaches the shadowy ocean floor 150 feet (45 meters) below the surface in 40 seconds and begins searching for food.  After about 80 seconds, the cormorant catches a small snakelike fish and returns to the surface.

More than 7,000 imperial cormorants live in Punta León, and the WCS says studying how the birds eat will help scientists identify and protect feeding areas.